THE first of 15 Alstom Coradia Polyvalent bi-mode multiple units for the Dakar TER project left Alstom’s Reichshoffen plant in eastern France on October 22 on the first leg of its journey to Senegal. 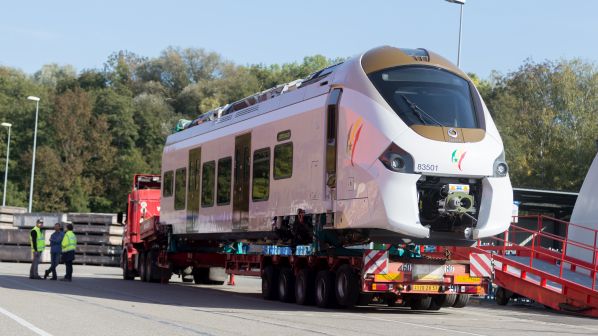 The four-car train is being moved by road to the port of Le Havre in northern France, where it will be loaded onto roll-on roll-off freighter Grande Angola for its voyage to Dakar, where the ship is due to dock on November 12.

The train will be reassembled and reunited with its bogies at a new purpose-build depot at Colobane 3km from Dakar where static and dynamic testing will take place.

A second train is due to be shipped to Dakar in mid-November, with deliveries continuing at a rate of around one train per month thereafter. “Everything is on schedule from Alstom’s point-of-view and the project is in good shape,” Alstom’s managing director for North Africa, Mr Raphael Bernardelli told IRJ. “We have recruited Senegalese staff for the project and since August they have been undergoing intensive training at Reichshoffen. They will go back to Dakar for the arrival of the first train and the first dynamic test will take place there within a month.”

The 160km/h diesel and 25kV ac electric multiple units are 72m long and accommodate up to 531 passengers in first and second class. Trains will operate in multiple, providing capacity for more than 1000 passengers on peak services.

The trains are technically similar to the electro-diesel variant of the Coradia Polyvalent trains currently being delivered to the French regions, albeit with enhancements for the Senegalese climate, most notably in the HVAC system. 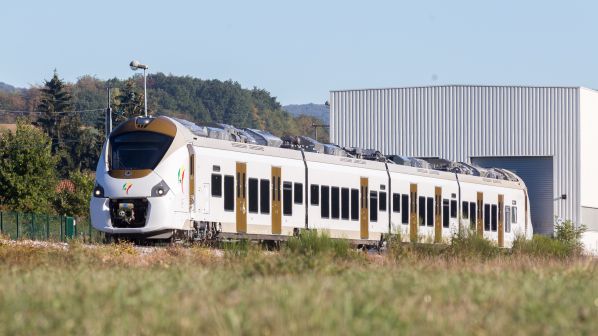 The TER project is a key component of the Senegalese government’s Plan for an Emerging Senegal policy framework.

The 57km standard-gauge line will link Dakar city centre with the new Blaise Diagne International Airport (AIBD) near Ndiass largely following the western section of the existing Dakar – Diourbel metre-gauge line, which is being upgraded as part of the project. The line will have 14 stations, with a journey time of 45 minutes between Dakar and AIBD and daily forecast ridership of up to 115,000.

The double-track line has been designed for 160km/h operation with 25kV ac electrification and GSM-R.

The Senegalese Agency for Investment Promotion and Public Works (Apix) awarded a French consortium of Engie and Thales a €225m contract in 2016 to design and build infrastructure and systems for the project. The €500m civil works contract was awarded to a consortium of CSE, Senegal; Yapi Merkezi, Turkey; and Eiffage, France.

SNCF-Keolis and RATP Dev will operate and maintain the line under a five-year contract.

Construction was officially launched in December 2016 and commercial services are expected to begin on the initial 36km section between Dakar and the new city of Diamniadio in mid-2019.

Apix is the second customer for the Coradia Polyvalent in Africa after Algerian National Railways, which placed a €200m order for 17 bi-mode inter-city trains in July 2015. The first of these entered service in March and the final train is due to be shipped to Algeria by the end of the year.