BOTSWANA Railways (BR) exported the first coal consignment from the Masama coal mine following a launch ceremony on July 17 attended by government ministers and officials from BR, mine owner Minergy and banking group Absa. 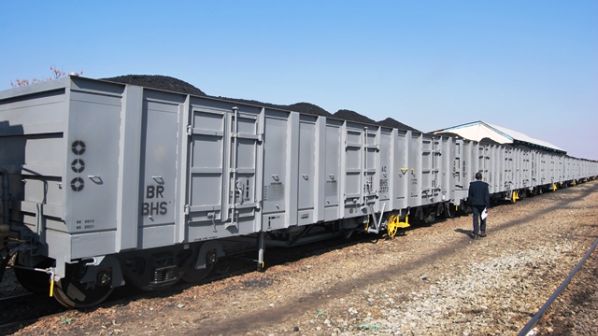 The 2650-tonne coal shipment was initially transported 60km by road from the mine in Mmamabula to the the Tshele Hills rail siding in Kgatleng, southern Botswana, which was upgraded to support the loading of coal onto freight trains following the approval of construction in 2017.

The train consisted of 50 high-sided BHS wagons, each carrying around 53 tonnes. It is the first of three consignments ultimately destined for delivery to an unnamed South African cement manufacturer.

The coal was mined at Minergy’s Masama coal mine, Botswana’s first privately-operated coal mine, which began production in February last year.

“It is without a doubt that infrastructure and by extension railway infrastructure acts as a key enabler of economic development, a catalyst for business and a facilitator of employment creation,” says Mr Thulagano Merafe Segokgo, Botswana’s minister of transport and communications.

“As a landlocked country, we need supporting rail infrastructure to deliver our coal to the ports. Prioritising investment in infrastructure that supports and stimulates Botswana’s key industries such as coal mining and agriculture is essential to ensure that the country is able to sustain a diverse and growing economy that will generate attractive employment opportunities.”

This news follows efforts by BR to expand its modal share of Botswana’s coal transport, including plans to begin construction of the 56km Mmamabula - Lephalale 1067mm-gauge freight line in the second half of 2021. The line will provide a more direct route between the coal field and Lephalale in Limpopo Province, South Africa, where it will connect with the existing rail network. Planning for a longer 367km cross-border Mosetse - Kazungula - Livingstone freight line between Botswana and Zambia is also currently underway.

Botswana’s vast natural mineral reserves, which include an estimated 200 billion tonnes of coal, remain relatively unexploited due to poor infrastructure.