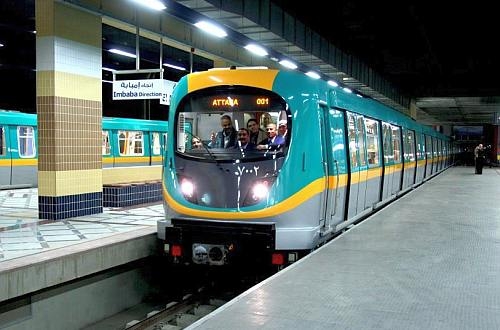 The five-station extension, which was completed five months ahead of schedule, is expected to increase daily ridership on Line 3 to around 600,000 passengers.

Civil works on the project were carried out by a French consortium of Vinci Construction and Bouygues with Egyptian partners Orascom Construction and Arab Contractors. Colas Rail, Alstom and Thales were responsible for electromechanical works, while tracklaying was carried out by Vinci subsidiary ETF Eurovia and Orascom. Signalling and automation systems were supplied and installed by Alstom and Thales.

The initial 4.3km five-station section of Line 3 between Abbasiya and an interchange with Line 2 at Attaba opened in February 2012, and when all stages are complete the line will be 34km long stretching from the city's international airport in the east to Mohandiseen and Embaba in Giza in the west.

In September 2012, Egypt's government signed a €940m loan agreement with the French Development Agency and the European Investment Bank to help fund the third phase, which will be 18km long with 15 stations.

Line 3 is the first metro line in the city to be equipped with automatic train operation. Seven additional eight-car trains have been acquired from Mitsubishi for phase 2.