DALIAN Locomotive and Rolling Stock, a subsidiary of China’s CRRC Corporation, has rolled out the first of 15 trains for the initial phase of the metro network in Nigeria’s largest city Lagos. 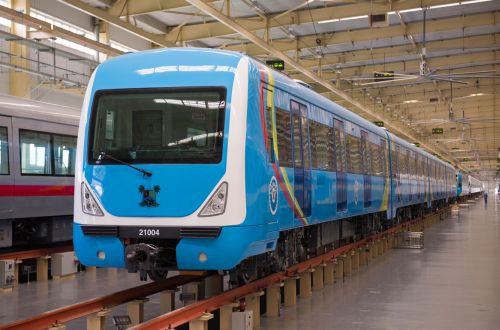 The stainless-steel-bodied 750V dc third-rail sets for the Blue Line are based on trains supplied for Tianjin metro Line 2 and are the first trains to be built in China for an African metro. Each four-car train is formed of two powered vehicles and two trailers, and has a maximum speed of 100km/h.

Lagos Area Metropolitan Transport Authority originally planned to use refurbished H5 trains formerly used on the Toronto subway network, but following a reassessment of rolling stock requirements it decided in January 2015 to order new trains from CRRC with the aid of a loan from China’s Exim Bank. The contract for 15 trains includes an option for a further 14 sets.

The 27.5km 13-station Blue Line will link Marina in the west with Okokomaiko in the east. Commercial services are due to begin on the first even-station Marina - Mile 2 section of the line in December.