THE first of 600 X'Trapolis Mega six-car commuter EMUs for Passenger Rail Agency of South Africa (Prasa) has been delivered to the operator's Wolmerton depot near Pretoria in readiness for the start of dynamic testing on the South African network. 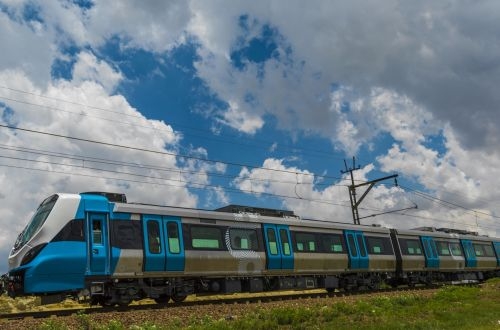 The €4bn contract to supply 3600 vehicles, together with components and technical support for the fleet for 18 years, was awarded in December 2013 to the Gibela Rail Transport joint venture, which comprises Alstom (61%) New Africa Rail (9%) and Ubumbano Rail (30%).

The first 20 trains are being built at Alstom's Lapa plant in Brazil while the remaining 580 sets will be assembled by Gibela in South Africa at a purpose-built production facility at Dunnottar in Gauteng province. The 85,000m2 plant site will directly employ 1500 staff with capacity to produce up to 62 trains per year.

Static testing was carried out on the first train at Lapa prior to shipping and the set will now undergo dynamic testing at speeds of up to 132km/h in South Africa. Testing will focus on traction and braking performance up to crush load, as well as gauging, heaving ventilation and air-conditioning, passenger information systems, CCTV, signalling, multiple operation, and the remote diagnostics system.

A second train is due to arrive in South Africa early next year.