TESTING is underway at Alstom's Lapa plant in Brazil on the first of 600 X'trapolis Mega commuter EMUs for Passenger Rail Agency of South Africa (Prasa), while preparations for the transfer of production to South Africa are also making progress. 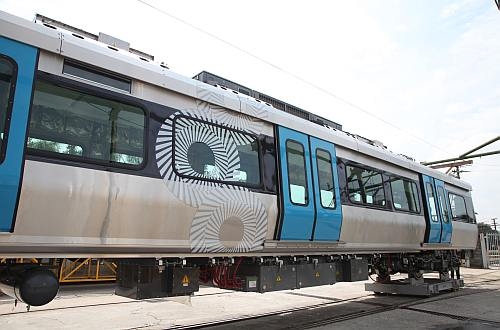 The €4bn contract to supply 3600 vehicles, together with components and technical support for the fleet for 18 years, was awarded in December 2013 to the Gibela joint venture, which comprises Alstom (61%) New Africa Rail (9%) and Ubumbano Rail (30%).

The first 20 six-car trains will be built in Brazil while the remaining 580 sets will be assembled by Gibela in South Africa at a purpose-built production facility at Dunnottar in Gauteng province. Construction will begin on the 85,000m2 plant in the third quarter of this year and the site will have capacity to produce up to 62 trains per year.

Gibela will directly employ 1500 staff at Dunnottar and Alstom says the supply chain will create many more jobs in South Africa, with the aim of achieving a local content level of more than 65%. Alstom is currently training staff for the new plant at Lapa in preparation for the start of production in South Africa.

The first train is due to be shipped from Brazil in September and will arrive in South Africa in November. Gibela says the fleet will enter service from mid-2016 and production will begin at Dunnottar by the end of next year.