GE to supply 100 locomotives to Angola

GE Transportation (GE) has secured a contract from AEnergia to supply 100 C30ACi locomotives to Angolan National Railways (INCFA) to boost railfreight services in the country. 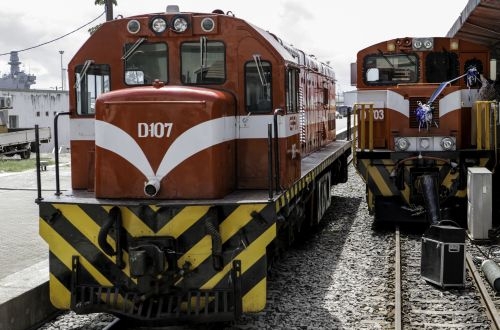 Manufacturing of the six-axle diesel electric locomotives will take place at GE's plant in Erie, Pennsylvania, and delivery of the units, which will be fitted with a 12-cylinder 2.2MW diesel engine, is set to begin in 2016. The deal also includes services, tools and training. GE would not disclose the value of the order.

The new locomotives will support services on the 907km Moçâmedes Railway between Menongue and Namibe on the Atlantic coast, and the 1344km Benguela Railway, which runs from Luau on the border with the Democratic Republic of Congo to Lobito on the Atlantic Coast, and is part of the 1067mm-gauge Lobito corridor between Angola, the Democratic Republic of Congo and Zambia. Traffic on the Angolan portion of this route ceased during the country's 26-year civil war which ended in 2002 but was restored in August 2014 following a Chinese-backed rehabilitation project.

Zambia is also committed to building a new 590km railway between Chingola in Zambia and the Angolan border, while Zambia's Northwest Railway Company is working with Grindrod, South Africa, to develop a 290km railway from its copper mines at Lumwana and Solwezi to Chingola. A 300km second phase is envisaged to connect with the Benguela Railway near Jimbe.

GE has delivered more than 320 locomotives to central and southern African countries in the past four years, and its order backlog currently stands at more than 400 units.