CONSTRUCTION of the $US 3.8bn 472km Mombasa - Nairobi standard-gauge railway (SGR) is due to be completed in March by China Railway and Bridge Corporation (CRBC), which has a 10-year concession to operate the line, to allow test running to begin in preparation for the start of train operation in June. 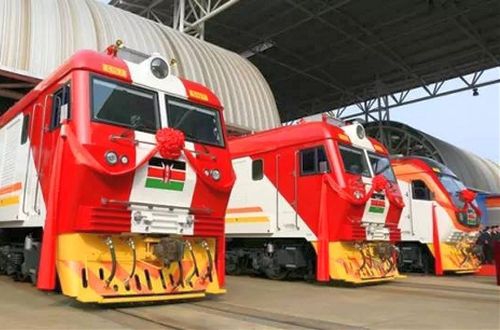 “The first class of 105 trainees completed their classroom training in November 2016 and are currently on hands-on training in the field,” says Mr Atanas Maina managing director of Kenya Railways Corporation (KRC), which is overseeing the project.

The tests will be used to validate the new automatic block signalling system, which is the first installation of its kind in Kenya. The signalling operates on a fibre optic and microwave backbone supported by an independent electricity supply. In addition to lineside signals, the locomotives also have cab displays to show the status of signals.

CRRC is providing the fleet of 56 diesel locomotives, 1620 freight wagons and 40 coaches. So far 12 locomotives and 35 passenger coaches have been received with delivery scheduled to be completed by May. The first freight wagons have also arrived in Kenya.

Passenger trains will be able to accommodate 960 passengers and will have a top speed of 120km/h, while freight trains of up to 4000 tonnes or 216 TEUs will operate at a maximum of 80km/h. The maximum axleload on the new line is 25 tonnes.

Considerable attention is being paid to security. “The National Police Service has a division charged with the responsibility of securing Kenya’s railway installations,” Maina says. “Already this police division is in discussions with KRC and the CRBC to provide security to all sensitive SGR installations including long bridges, passenger and ordinary crossing stations and installations, railway fences and freight terminals.”

Security officers will be backed by 24-hour CCTV surveillance monitored from the Nairobi Control Office and it is envisaged that there will be police stations at each of the 33 stations along the line so that officers can be quickly deployed to respond to emergencies.

For detailed data on rolling stock orders and railway projects around the globe, subscribe to IRJ Pro.