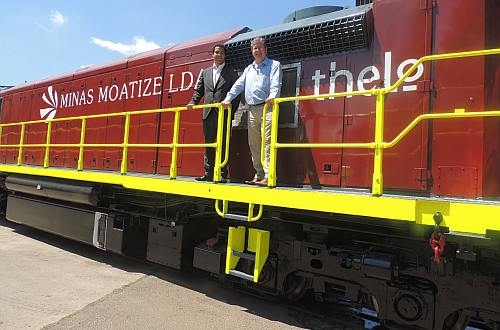 Leasing Company Thelo Rolling Stock has ordered five RL30SCC diesel locomotives from Pretoria-based RRL Gridrod and 90 open bogie wagons from Transnet Rail Engineering on behalf of Beacon Hill. The locomotives are currently being inspected and certified by Mozambique Railways (CFM) in South Africa, and will be transported to Mozambique by rail. The wagons will be shipped from Port Elizabeth to the port of Beira in Mozambique. Beacon Hill says the vehicles will be ready for use in Mozambique by the end of February.

CFM has granted Beacon Hill a 7.7% capacity allocation on the Sena Line, which will allow it to transport 500,000 tonnes of coking and thermal coal per year from the Moatize Basin in Tete province to Beira, a distance of 580km. The interim rail access agreement will automatically renew each year until Beacon Hill and CFM enter into a long-term agreement.

The locomotives have a tractive effort of 290kN at 20km/h and are equipped with EMD 16-645 E38 engines, which have been remanufactured to EMD specifications by National Railway Equipment Company, United States.