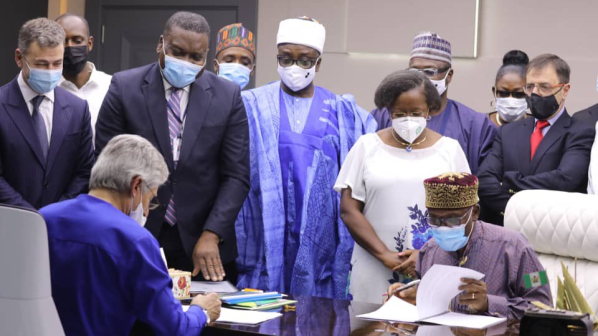 The single-track standard-gauge line will have 12 stations and will provide a coastal connection between landlocked Niger and the southern Nigerian ports of Lagos and Lekki. The line will also include a 93km branch from Kano to Dutse, the capital of Jigawa state. The line will run through the Nigerian states of Kano, Jigawa, and Katsina, and the Maradi region in Niger. Construction is due to take two years and eight months.

Under a condition of the contract, signed by Nigeria’s minister of transport, Mr Rotimi Amaechi, and Mota-Engil managing director, Mr Antonio Gvoea, Mota-Engil will also construct a new university in Nigeria.

Funding for the railway, which is being structured and negotiated by KFW-IPEX Bank, Africa Finance Corporation and Credit Suisse, was approved by Nigeria’s Federal Executive Council in September. The line is part of a plan to boost economic growth in the country and aid reconstruction in northern regions, parts of which have suffered at the hands of terrorist group Boko Haram in the past decade.

It is also part of wider efforts to revitalise rail infrastructure. Other projects include the 156km $US 1.5bn Lagos - Ibadan line, which began trial operation in late December although opening has been delayed by the coronavirus pandemic.

The double-track line is part of a planned $US 11.1bn, 2733km Lagos - Kano standard-gauge north-south railway. The first 186.5km section of the project, between Abuja and Kaduna, opened in July 2016.