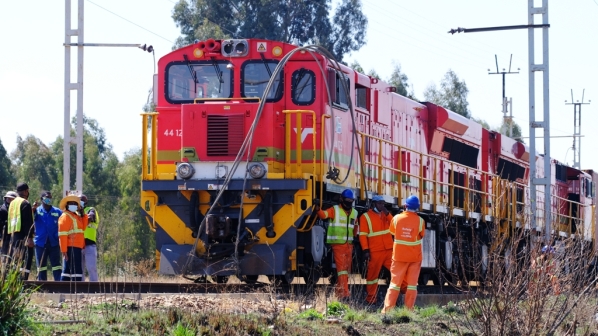 Cable theft is a major problem on the South African railway network.

THE South African government intends to spend Rand 1.9bn ($US 137.2m) to repair vandalised railway infrastructure after the government-imposed lockdowns to contain the spread of Covid-19.

“The impact of the Covid-19 restrictions exposed the vulnerability of our network, resulting in occupation of the rail reserve by people who built illegal settlements on the tracks and inside the reserve,” transport minister, Mr Fikile Mbalula, said while unveiling the Ministry of Transport’s budget. “This was further exacerbated by the wanton destruction, theft and vandalism of our infrastructure.”

South Africa is among countries worst hit by the pandemic with more than 1.6 million cases and about 56,000 deaths.

Mbalula says the government is working to resume passenger services and has worked with the police and intelligence services to implement security measures to protect railway infrastructure. The government has blamed Passenger Rail South Africa (Prasa) for the destruction of the network, after it failed to implement contingency plans following the termination of contracts with private security companies.

About 80% of Prasa’s fleet was also vandalised during the Covid-19 lockdowns.

Mbalula also announced that the Ministry of Transport budget will increase at an average annual rate of 8.1% over the next three years, from Rand 55.9bn in 2020-21 to Rand 74.5bn in 2023-24. A substantial share of the expenditure will be directed towards rail infrastructure, maintenance, operations and inventories.

Prasa is also implementing a railway revitalisation plan that includes a rolling stock fleet renewal programme. Over the medium term, the government intends to increase the agency’s budget at an annual rate of 164.3%, from Rand 700m in 2020-21 to Rand 12.9bn in 2023-24.

“The Gibela factory continues to ramp up its production capacity as new trains roll off the assembly line every month,” Mbalula says. “Despite the Covid-19 disruptions, as of March, 25 new trains had been provisionally accepted for delivery. This brings the total number of new trains delivered to date to 61.”

The government has identified strategic rail corridors in Johannesburg, Cape Town, KwaZulu-Natal and Pretoria where infrastructure upgrade works are ongoing to facilitate deployment of the new trains.

The plan also includes plans to improve safety, which will be further boosted with the adoption of the Railway Safety Bill later this year.

As part of its plans to modernise the railway network, the government is considering the privatisation of some lines that have struggled with years of mismanagement, vandalism and theft, particularly in the Gauteng and the Western Cape regions.