RUSSIA has boosted its initiative to strengthen ties with the African continent, signing a number of agreements and memorandum of understandings (MoUs) to collaborate on various rail projects during the Russia-Africa economic forum in Sochi on October 23-24. 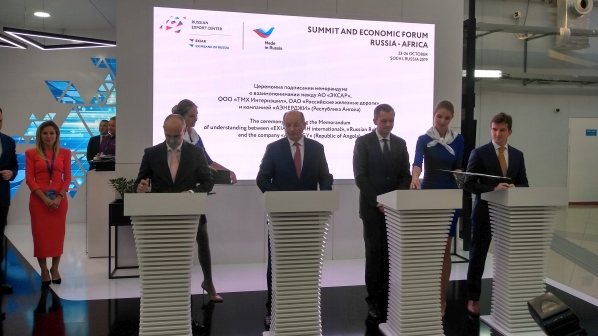 RZD first deputy general director, Mr Alexander Misharin, told delegates that RZD was interested in opportunities to build new lines and modernise existing ones in Africa, as well as proposals for the supply of equipment and rolling stock and the development of human resources.

“Of the nine fastest growing countries in the world for the coming decades, five are in Africa,” Misharin says. “We are ready to transfer not only technological projects and solutions, but also the financial instruments that are used around the world.”

A number of potential projects are being discussed with Egypt, and project initiatives are being considered in Nigeria, South Africa, Ghana, Botswana, Angola and other African states.

Addressing a question about developing continent-wide collaboration, Misharin said RZD was ready to cooperate with the development of trans-African routes. “If a management company that sets itself the task of implementing large-scale infrastructure projects is created, then we are ready to take part in this.”

RZD, Transmashholding (TMH), Russian Agency for Export Credit and Investment Insurance (Exiar) and Aenergy signed a MoU to promote, co-develop and implement railway projects in Angola. The memorandum focuses on the delivery of integrated projects, including structured financing, technologies and services, with a large degree of localisation.

Democratic Republic of the Congo (DCR)

Misharin and DCR minister of transport and communications, Mr Didier Mazengu Mukanzu, signed a memorandum of cooperation, to study cooperating in areas such as the restoration, modernisation and construction of railway lines in DCR, and developing logistics, freight and passenger transport.

The companies will also work together on training DCR’s railway employees through Russia’s universities, and will create a joint working group of experts to implement the signed memorandum.

Following the singing, RZD said it will determine the extent of its participation in the proposed projects in Nigeria, in particular the Lagos - Calabar section of the Coastal Line project and the Harcourt - Maiduguri port project.

Belozerov and the chairman of Egyptian National Railways (ENR), Mr Ashraf Raslan, signed a letter of intent to jointly implement projects to modernise Egypt’s railway infrastructure, and cooperate on potential projects such as the construction of a new Manashi - October 6 line, track-doubling the Kaliup - Menuf - Tanta, Imbaba - Manashi - Itad - Alexandria and Tanta - Zeft - Zagazig lines, the installation of signalling systems on these routes, and creating a single dispatch centre for ENR, with ENR employees to be trained at Russian universities.

For detailed information on rail projects in Africa, subscribe to IRJ Pro.