RIFT Valley Railways has taken delivery of its first batch of former GE B23-7 diesel locomotives which have been rebuilt by NRE as C23-7 units equipped with NRE's NForce control and concluded a $US 20m financing deal for the fleet of 20 units. 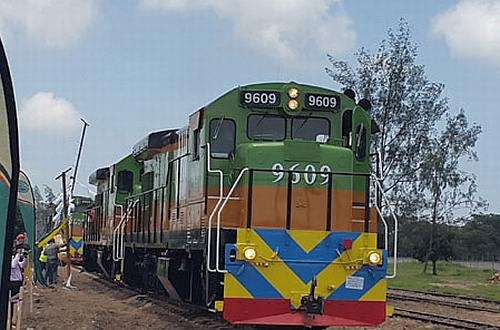 The first batch of three locomotives arrived at the port of Mombasa in early September, and was officially unveiled on September 18 by Kenya's transport cabinet secretary Mr Michael Kamau. The remaining 17 units are due to be delivered to Kenya by next May.

"When combined with the locomotives that are being rehabilitated in the rail operator's Nairobi workshop the trains will double RVR's mainline locomotive fleet, substantially increasing its freight haulage capacity in Kenya and Uganda," said Qalaa Holdings, RVR's majority shareholder, in a statement on September 17.

RVR chief executive officer Mr Carlos Andrade added: "Insufficient locomotive power is the single biggest obstacle preventing a step change in the volumes we transport. This new financing not only alleviates the bottleneck but is also a vote of confidence by a major international lender in our operations."

Qalaa Holdings, which until recently was known as Citadel Capital, now holds 85% stake in RVR after acquiring a 34% additional stake from Nairobi-listed infrastructure company Transcentury. The remaining 15% is held by Bomi Holdings.