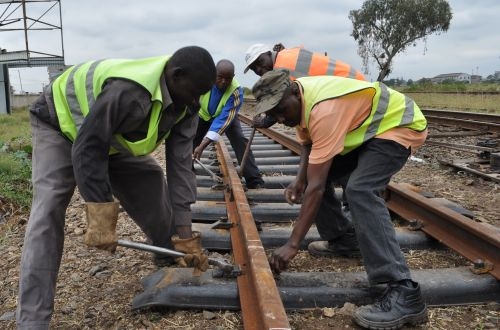 RVR's executive vice-chairman Mr Brown Ondego says the repairs, carried out by several small Kenyan contractors, included laying 10,000 sleepers to improve track geometry and safety. "The KSh 1.7bn ($US 19.8m) investment in rebuilding this stretch of railway is a significant milestone as this line had been ailing for lack of investment for over a decade prior to the concession.

"The completion of this project under our continuing track upgrading programme has considerably improved the reliability and efficiency of our operations," Ondego explains. RVR is now able to run higher-capacity trains. Ondago says the work should reduce disruption to train services caused by poor-quality track by over 60%, while the freight transit time between Mombasa and Nairobi has been cut by six hours.

RVR plans to invest a further $US 164m to rebuild 360km of poor-quality track along the route from Mombasa via Nairobi to Kampala, Uganda, and repair wagons and locomotives.

RVR won its 25-year concession in 2006 but Kenya's new transport cabinet secretary Mr Michael Kamau said two weeks ago the agreement could be reviewed because of poor performance. Kamau says that since the concession started seven years ago, "freight transported by rail has gone down from 15%t to 3%." He then added: "we will look at the concession again and see whether it is working."