THE governments of Ivory Coast and Burkina Faso have signed a revised operating concession with Sitarail, part of the Bolloré Group, to include responsibility for the infrastructure of the 1260km railway linking the two countries. 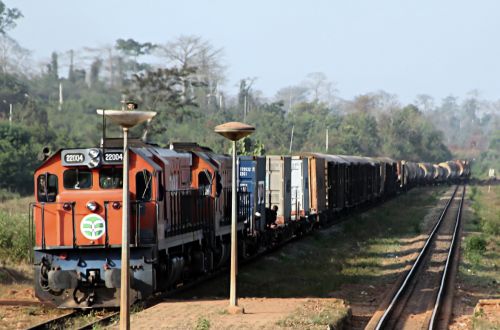 The agreement was signed during the first visit to Ivory Coast by the president of Burkina Faso, Mr Roch Marc Christian Kaboré. Sitarail has operated the railway for the last 22 years and will now become responsible for maintaining and renewing the infrastructure including stations and workshops. A key element of this will be a €400m project to completely refurbish an 852km section to increase capacity and line speeds. Work will start in September and is expected to take five years to complete.

The metre-gauge railway runs from Abidjan in Ivory Coast via Ouagadougou to Kaya in Burkina Faso and has 59 stations. The line carries around 180,000 passengers and 900,000 tonnes of freight a year comprising mainly fuel, containers, fertilizer, cotton, local produce and cement. Once the line has been upgraded it should be able to carry 5 million tonnes of manganese ore per year from Tamboa mine in northern Burkino Faso, which is operated by Pan African Minerals Mining Group.

“The signing of this new agreement marks a key step which is fully in line with the significant efforts made by the Bolloré Group since the creation of Sitarail,” says Mr Eric Melet, chairman of Bolloré Railways. “The attractiveness of the railway will be considerably strengthened to accommodate new traffic, such as ore, induced by the long-term growth of the sub-region.”