THE GLOOM hanging over the Passenger Rail Agency of South Africa (Prasa) lifted a little on May 9 as the first of a fleet of Alstom X'Trapolis Mega EMUs entered service on one of the country's busiest commuter corridors. 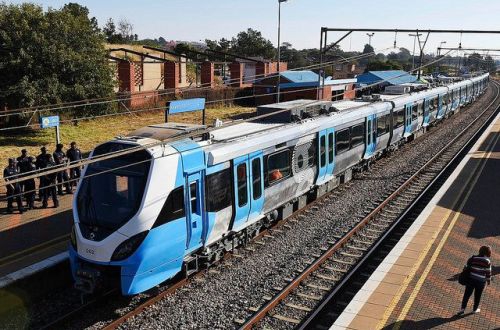 The six-car sets are the first of a 600-strong fleet to be built by the Gibela consortium, a joint venture in which Alstom is the majority shareholder. The EMUs will replace the country's elderly and unreliable commuter train fleet over the next decade.

The 13 X'Trapolis sets - which will be joined by a further seven sets from Alstom's Lapa plant in Brazil - are expected to operate 146 daily services on the busy Koedoespoort - Rissik commuter corridor in Pretoria.

Gibela will build the bulk of the new fleet at a new Rand 928m ($US 69m) manufacturing plant currently under construction at Dunnottar, east of Johannesburg.

Gibela chief executive Mr Marc Granger noted that the arrival of the X'Trapolis Mega EMUs meant that South African rail commuters finally had "access to a service that marks entry into a new age of rail".

The new plant is due for completion by the end of the year. The training centre, which will train South African technicians to build the X'Trapolis sets, has already admitted its first students, Gibela said.

The plant aims to produce 62 trains a year, with 200 South African suppliers providing components according to localisation requirements.

The launch on May 9 was the first positive news that Prasa has enjoyed for some time. The agency has been wracked with turmoil in recent months after a series of incidents which included the firing of its temporary chief executive, followed shortly afterwards by the sacking of its entire board.

The board, which has since been reinstated following a cabinet reshuffle in which the country's transport minister was herself replaced, had been investigating contracts that Prasa had awarded to various suppliers during the tenure of previous CEO Mr Lucky Montana.

Meanwhile, commuter services continue to be plagued with service issues. Most of the commuter EMUs are at least 40 years old and, despite a major refurbishment programme in recent years, reliability remains poor. Meanwhile, signal failures are widespread due to cable theft.