The new standard-gauge railway will replace the existing metre-gauge line. 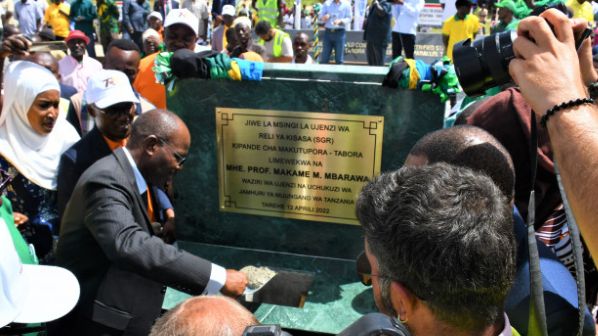 The foundation stone for phase 3 of Tanzania's standard-gauge railway project was laid in Tabora.

TANZANIA’s minister of works and transport, Prof Makame Mbarawa, laid a foundation stone for the Makutupora - Tabora phase three section of the Dar es Salaam - Mwanza standard-gauge railway project on April 12 at the Cheyo B stadium in Tabora.

Yapı Merkezi, Turkey, was awarded a $US 1.9bn turnkey contract for the infrastructure works, including the signalling, telecommunications, and electrification. The project must be completed in 3 years 10 months including trial operation.

“Our company has already undertaken the construction of the first two phases of the Dar es Salaam - Mwanza railway in Tanzania, which will be the fastest railway in East Africa,” says Mr Erdem Arıoğlu, vice-chairman of Yapı Merkezi Construction.

The 1219km 160km/h standard-gauge railway is being built in five phases:

About 80% of the new railway is being built parallel to the existing metre-gauge line while 20% will be on new alignments to avoid sharp curves.