TRANSNET Freight Rail (TFR), South Africa, is to introduce 200-wagon trains between the coalfields of Mpumalanga province and the port of Richards Bay in an effort to increase the capacity of the corridor to 81 million tonnes in the next financial year. 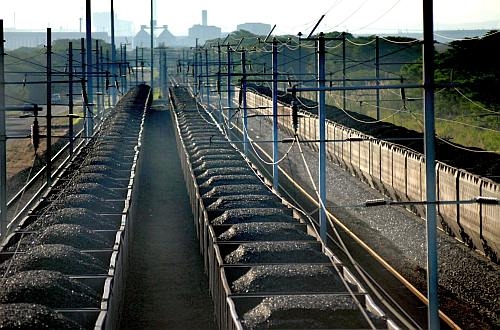 Project Shongololo (millipede) involves running longer trains directly from the mines to the port, bypassing the marshalling yard at Ermelo, where 100-wagon trains are currently paired into 200-wagon consists for the remainder of the journey along the 588km heavy-haul line to Richard's Bay. This process was cumbersome, involving significant train handling and shunting to couple and uncouple wagons.

Commenting on the initiative, TFR Chief Executive Mr Siyabonga Gama, said Project Shongololo will significantly improve fleet utilisation, reducing cycle times from an average of 58 to 41 hours for locomotives and from 63 to 48 hours for wagons. "Reducing train handling will improve reliability, which will equate to improved sustainability and service predictability," he says.

According to TFR, the service will increase weekly railed export coal capacity by 30% from 1.4 million tonnes per week to as much as 1.95 million tonnes per week in the fourth quarter. It will also allow TFR to operate up to 34 coal trains per day on the Richards Bay corridor by the end of the year, compared with 25 at present. TFR says this will allow the railway to accommodate output from new mines currently being established in Mpumalanga.

Project Shongololo has been made possible by the introduction of new technologies, such as distributed power and dual-voltage electric locomotives.