GREATER Wellington Regional Council has sold 34 redundant class EM emus built by Ganz-Mavag, Hungary, in 1982, to an unnamed buyer in South Africa, which will refurbish the trains for re-use in Africa. 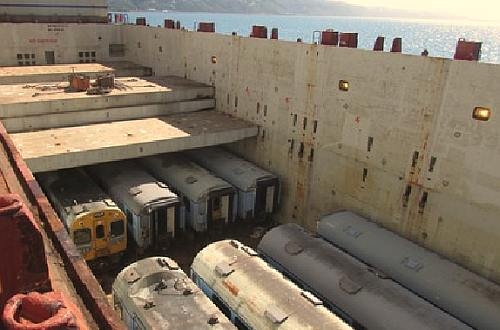 The first vehicles were loaded onto the cargo vessel MV Pangani on February 17-19 at CentrePort in Wellington for the voyage to South Africa. They will be converted into locomotive-hauled coaches for use on an airport shuttle service in the Tanzanian capital Dar es Salaam, and in Zimbabwe, where National Railways of Zimbabwe (NRZ) is looking to reinstate the Harare – Beira passenger service.

The vehicles for Tanzania will need to be re-gauged before entering service, although Zimbabwe shares the 1067mm gauge found in New Zealand.

The trains have been displaced from commuter services in Wellington by the delivery of new FP class Matangi emus from Hyundai Rotem.

The arrival of a further batch of Matangi emus in the middle of next year will allow the withdrawal of the remaining EMs, which will also be shipped to South Africa, although one set will be retained in New Zealand for preservation.