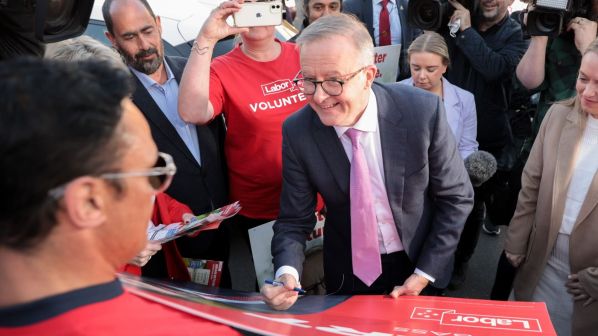 Anthony Albanese is Australia's new prime minister after his Labor Party won a majority in the election on May 21.
Photo Credit: Twitter/AlboMP

THE election of a federal Labor government is good news for Australia’s rail sector with the new government having already pledged nearly $A 3bn ($US 2.1bn) to rail projects during the campaign while raising the possibility of a start on a high-speed network.

The Australian Labor Party has long favoured public transport and rail in particular, and the new government is no exception.

In the lead-up to the May 21 poll, according to think tank the Grattan Institute, the Labor Party promised nearly $A 30bn to public transport while the Liberal coalition’s promises were half that.

The new government’s largest single rail promise is to back Victoria’s ambitious multi-billion-dollar suburban rail loop, which is designed to link all of Melbourne's rail lines in a 90km arc. The loop currently has a projected price tag of $A 50bn over several decades.

The Victorian state government has already allocated more than $A 2bn to the project for early preparatory work.

During his election campaign the then opposition leader, now prime minister, Mr Anthony Albanese, said he could not think of “a more exciting infrastructure project in the entire nation.”

“That’s why federal Labor will contribute an initial $A 2.2bn to this project,” he says. “This project will transform the way that Melburnians can get around this city, but also transform the whole of Victoria.”

The other big spending promise was to New South Wales. Albanese promised $A 500m in Labor’s first budget as initial funding to start work on Newcastle - Sydney “fast rail” project. The money would support land acquisition, planning and early works on the project, which will be designed for operations at up to 250km/h and cut Newcastle - Sydney journey times to just two hours.

The prime minister also believes the project will be the first step to high-speed rail, indicating that Labor would support a high-speed rail link between Melbourne and Brisbane.

“I want ours to be the first government that actually gets work underway on high-speed rail,” he said. “My vision is for high-speed rail that runs from Brisbane to Melbourne.

“Under a Labor government, the High-Speed Rail Authority will make the corridor from Newcastle to Sydney, which includes stops at the Central Coast, its first priority. We’ll start with a fast rail corridor but we’ll plan and build for the move to high-speed rail.”

The new government has been more cautious when it comes to promises for South Australia, only saying it will support public transport projects across Adelaide without committing to a dollar figure.

Albanese said Labor was committed to making the multi-billion-dollar AdeLINK tram network a priority and to restoring funding to the Gawler line electrification project.

The state government is preparing a business case for the extensive tram network but still needs federal funding.

State transport minister, Mr Stephen Mullighan, says the proposed tram network in Adelaide's inner suburbs would cost billions of dollars if delivered in full. He said the tram lines may only be built in stages.

In Western Australia, the incoming government made a modest financial contribution to Perth’s Metronet project during the election campaign, pledging $A 87.5m towards a new elevated Beckenham station and level crossing removal.

The new government has also confirmed its support for the Inland Rail project to construct a new 1715km dedicated freight line between Melbourne and Brisbane. However, it says it will launch an inquiry into the route selection process and financing arrangements.

Incoming minister for infrastructure, Ms Catherine King, says the Labor Party had real concerns about the escalating cost of the line, which now stands at $A 14.5bn. The project promises Melbourne - Brisbane transit times of under 24 hours, making it competitive with road transport as well as offering the ability to operate trains carrying double-stack containers.

“Policies that support a strong Australian rail manufacturing sector will ultimately lead to better deals for governments and create more jobs in the process,” Wilkie says.

Wilkie added that the Labor government’s commitment to establishing a national infrastructure agenda and framework, and its strong commitment to faster rail, would maximise the benefits of rail investment in the future.

“A strong national approach to infrastructure development will assist industry in driving innovation, building workforce capability and delivering improved outcomes for the economy,” she says.

For tenders and detailed data on rail projects in Australia, subscribe to IRJ Pro.