Bright times ahead for Brightline

The Inter-city operator is looking to the future as new trains arrive and new lines progress, as Richard Clinnick reports. 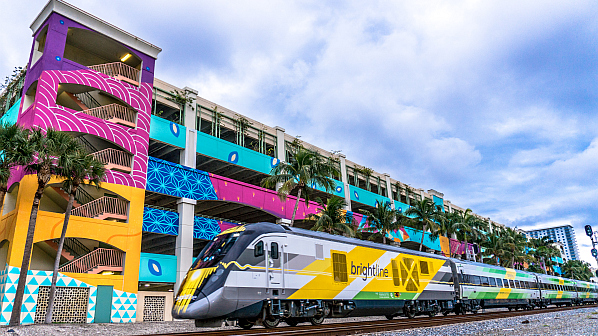 RESTARTING operations after a suspension of more than 18 months, the delivery of new trains and the opening of a 273km extension will make for an interesting next 12 months or so for United States inter-city operator Brightline.

In March 2020 the private operator suspended operations between Miami and West Palm Beach due to the outbreak of Covid-19. Despite the state of Florida’s resilience when it came to dealing with the impact of the pandemic, it was not until early-August this year that the operator was finally able to confirm it would resume operating on a yet-to-be-confirmed date in November.

At the time of the announcement, Brightline confirmed that both it and host railway, Florida East Coast Railway, were working in coordination with the Federal Railroad Administration (FRA) to commission Positive Train Control (PTC) and achieve system certification. When that is granted, the trains will restart, but currently there is no confirmed date.

But that does not mean the focus has squarely been on the resumption of operations in South Florida.  Since Brightline’s inception as All Aboard Florida in 2012, has been focused on expanding operations across the state, and eventually further afield. Those ambitions are now getting tantalisingly close.

On September 28 in Sacramento, California, a major demonstration of the next stage in the company’s story was unveiled when the first of the second tranche of trains ordered from Siemens Mobility was shown-off to invited guests.

Brightline ordered an initial five push-pull trains from Siemens in 2014. Each train is formed of four coaches with a Siemens Charger SBC-40 diesel-electric locomotive at each end. At the time of order, it was stated that five more trains would be ordered for the planned Orlando extension. This is the first of that order.

Together with Mr Michael Cahill, Siemens Mobility rolling stock North America president, Mr Mike Reininger, Brightline CEO, spoke exclusively to IRJ on September 27 ahead of the launch. “When we first started out, the eye was always on Orlando - Miami,” Reininger says. “We matched the trains to phases.”

“This was phase 2 of the order,” Cahill explains. “This is five four-car trains each with two Chargers, plus a spare. There are 20 carriages and 11 Chargers. It’s very rewarding working with Brightline. One of the great things is they say they want something, then that is what they want. If we don’t deliver then there is kickback, and that does work both ways.”

The stainless-steel coaches are from the Venture design, for which Siemens has also won a $US 3.4bn order with Amtrak for services in the north east of the United States, but Brightline was the first to introduce these coaches.

Transport of the trains from Sacramento to Brightline’s West Palm Beach depot will take at least 11 days. Following testing and commissioning the sets will provide additional flexibility on the existing 105km Miami Central - West Palm Beach line. Not all the new trains will be sent to the eastern coast of Florida with Reininger confirming that the final sets will be delivered to the new $US 100m vehicle maintenance facility at Orlando airport. The final trains are due for delivery in summer 2022.

As for the project to build the 273.6km extension from West Palm Beach to Orlando, Reininger says that “nearly there” is the right way to describe progress. The outbreak of Covid-19 did not hamper the project; indeed he says that if there was a silver lining from the pandemic it was that access was a lot easier for those building the new line. Constructing the new station at Orlando International airport was made easier by the lack of people flying while the reduced traffic on roads meant bridgeworks and logistics were easier.

He says around 60% of the project is now complete with the aim of starting services from Orlando to Miami by the end of next year. Journey times are expected to be two hours along the extension and three hours along the full 378.1km line. One-way fares will be as low as $US 17.

Speaking to IRJ in mid-2016 ahead of the launch of the Brightline service, Reininger, said there were around 500 million car trips annually between Miami, Fort Lauderdale, West Palm Beach and Orlando. The belief was that even if a small percentage transferred to rail, then the operator would be profitable. Locally the population is around 8.7 million, but the number of tourists visiting the state continued to grow. In 2013 there was an estimated 94.7 million visitors, rising to 133 million in 2019 prior to the pandemic. There was a decline in international tourism, yet domestic visitors continued to increase.

Reidinger said ahead of the launch that the aim for Brightline is to be a hospitality product and the target was revenue rather than riders. It was expected that 3 million passengers would travel on Brightline in the first 18 months.

Fast forward five years, and even though there has been a global pandemic, Reininger remains optimistic. During the pandemic he says that the state was one of the top choices for people to visit domestically and there was a “significant uptick” in visitors. He adds that many American financial service businesses have made big moves into south Florida, bringing staff with them. Those staff could be potential passengers.

“Florida has been one of the most resilient states, it leads the way,” he says of the Covid-19 recovery.

Orlando may be the next destination for Brightline, but the expansion does not end there. Next on the agenda is the 434.5km line between Las Vegas and Southern California. This was made possible following the acquisition in September 2018 of XpressWest, a high-speed project with rights to develop a $US 3.6bn federally-approved corridor connecting Southern California and Las Vegas. The developers hoped to offer an alternative to the “unpleasant drive” between the United States’ second-most populated city and Las Vegas. And with less than 10% of the market flying between the destinations, it predicted passenger ridership of 11.3 million.

The company acquired a 44.5 hectare area of land at the southern end of the famous Las Vegas Boulevard, and this will be used to develop an interchange for passengers to reach other key destinations from the city.

Reininger says “great progress” is being made with the project and that detailed design of the line is underway. Asked when construction work will begin, he tells IRJ: “it will be some time next year.”

However, while the ambition was there, it was also in the midst of the Trump administration where developing such projects looked more difficult. However, the Biden administration is intent on improving rail coverage and services, and if a major infrastructure spending package which allocates $US 66bn to rail is approved by Congress in the coming days, there could be a rapid turnaround in the fortunes of the country’s railway system.

Reininger certainly spies an opportunity. “We view this as really important for infrastructure, but specifically high-speed rail,” he says. “There has never been this level of talk before.”

He also believes that the fruit of Brightline’s labour has offered proof of concept to those wishing to invest in railways, specifically in new systems. Reininger says that Las Vegas - Los Angeles is an example of this, claiming it is a “shovel ready project” that it has been achieved through modest public and major private investment. He also previously welcomed the idea that a second line between the two cities could be built by Amtrak.

“When looking for opportunities in the private sector there needs to be scale and travel opportunity,” he says, and suggested that the optimum distance for a line is around 400km-560km. This is considered perhaps too short to fly but too long to drive.

Reininger says the other way of looking for opportunities is via leverage on existing transport corridors, or infrastructure. “We count in years, not decades,” he says. He discusses opportunities across the United States, and although he doesn’t name any specific projects, he suggests that around a dozen are feasible. “One of the important things we noticed is we were the only one talking about it,” he says.

The extended hiatus caused by the pandemic has afforded Brightline the opportunity to progress with several projects. These are exciting times for the private company, and North American railways in general. Both have been given a set of circumstances that cannot be wasted. It’s time to deliver. IRJ