The train is the first 160km/h diesel-battery hybrid multiple unit to enter passenger service in Britain. 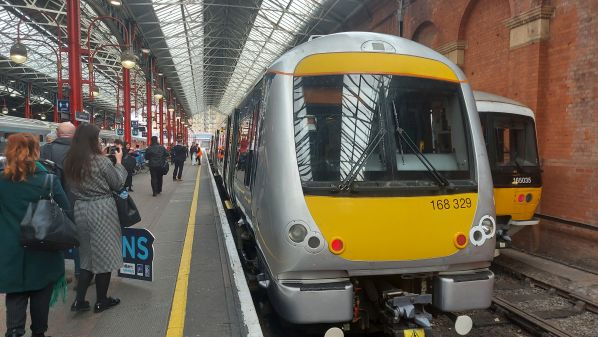 ARRIVA subsidiary Chiltern Railways has launched a 160km/h diesel-battery hybrid multiple unit into passenger service between Aylesbury and London, the first of its kind in Britain.

The batteries are charged by the diesel engines and regenerative braking, and in turn can be used to power the traction system in and out of stations and in urban areas, reducing CO2 emissions by 25%, nitrogen oxide emissions by 70% and pollutants by 90%. The use of the battery also reduces noise by up to 20 dB(A) or 75% in stations and urban areas, and also results in quicker journey times.

The launch marks the first time the MTU powerpacks have been used in passenger service, with Porterbrook ordering another four to be installed on class 168 and class 170 DMUs. Irish Rail (IE) has also ordered another nine for its class 22000 inter-city trains.

The class 168 has been fitted with the MTU Intelligent Drive Manager driver assistance system for the first time, which automatically switches to all-electric operation in emission and noise-sensitive areas such as cities or stations without driver intervention, including at terminus stations and within 250m of intermediate stations.

The project to develop the HybridFlex began following a memorandum of understanding signed by Porterbrook and MTU at InnoTrans in September 2018. Ricardo was appointed by Porterbrook in 2019 to provide engineering support for the integration of the mechanical, electrical and critical controls systems of the hybrid powerpack. The company also provided a range of certification and approvals activities ahead of the test programme in spring 2021.

Gemini provided support for the installation of the electrical equipment, while around 20 SMEs have been involved on the project. As one passenger onboard the inaugural run remarked, it would be impossible to fit all the staff who had contributed to the project onboard the two-car train at once.

“I firmly believe you can’t do innovation on your own,” Porterbrook innovation and projects director, Ms Helen Simpson, told IRJ during the inaugural run. “It’s no good doing it in isolation, it has to be a collaboration. And because you’re trying to push the boundaries and do something that’s technically challenging and difficult that nobody’s done before, you have to really get the whole team behind the end goal of what you’re trying to do and to work together through all of the problems that come along the way. I don’t think we can do it without that, and it’s certainly been a really effective way of doing this project.”

Simpson says the HybridFlex project began with a technical feasibility study and an evaluation of the space constraints on the Turbostar DMU. Testing began with a pre-production version of MTU’s engine, which was used for the validation and approvals.

The battery tests were completed in Friedrichshafen, Germany. This included battery simulations and load testing to monitor and validate the performance of the battery compared with the simulations developed during the feasibility stage. The train has also been equipped with brake blending which combines regenerative and mechanical braking. The team installed other new components on the train to interface with the new powerpack, including new controls for the driver such as a deceleration gauge and other isolation switches as well as a new electrically driven compressor.

“The Turbostar runs the compressed air supply from the existing engine,” Simpson says. “We’ve got the engine shut off in a station just when you’re operating the doors and passengers are getting on and off and the suspensions going up and down and using more of the air. We now have an electrically driven compressor that runs off the battery unit when it’s in the terminal stations and in battery mode.”

While the powerpack used on the HybridFlex is a generic platform, Simpson says the mountings and arrangement of the equipment needed to be tweaked to fit it onto the existing frame, causing one of the biggest issues.

“The fundamental thing that’s difficult here is that’s a very large power pack and battery module that has to fit in quite a small space,” she says. “The physical space constraints were probably the main challenge, because we’ve got an awful lot of new equipment to put on and some things that weren’t even there before like the battery modules. We’ve got to cram all of that in.”

3D modelling was used to overcome this issue. Ricardo created a model of the underframe while the suppliers were able to submit models of their components. “All of these things had the different packages that then interfaced into one overarching model,” Simpson says. “So we were able to check the manufacturability of it during the design stage.”

The HybridFlex will initially operate between Aylesbury and London Marylebone with plans to also test the hybrid system on the London - Bicester Village - Oxford route in the coming months. Marylebone is the last terminal station in London to be served solely by diesel services, and Chiltern Railway’s managing director, Mr Richard Allan, told IRJ that it is exploring alternative traction options for both its DMU and locomotive hauled fleets as the line from the station is unlikely to be electrified within the next two decades. While it is too early to say which technologies or systems, including hydrogen, could be used during this decarbonisation, Allan says the railway expects to have a plan in place by the end of the year.

Allan says the previous management had done well to modernise the Chiltern Railways network over the past 25 years with new stations, depots and routes, and it was now time to modernise again.

“We’ve got a 20-year vision for the fleet and a project team to look at what we need to do,” he says. “We’re looking at both the [London Underground] Metropolitan Line and the main line in terms of the options. At the moment, there isn’t any confirmation that the main line is going to be electrified in that 20-year period so we’re looking at all the alternatives you might think of other than mainline electrification. In terms of trains and the associated investment you might need in depots etc. it is a medium to long-term plan. And obviously, as part of that, we want to look at both the customer experience and what that’s going to achieve on decarbonisation.”

Allan adds that part of the challenge is comparing technologies that are currently available with those that might be entering service in the next five years, and building a business case to ensure funding is available now to implement these early.

“The decarbonisation agenda is all focused towards 2050, you can see that rail has got a really important part to play in allowing the economy to achieve that and to do that sustainably,” he says. “We’re really confident over that 30-year period. The challenge right now is just unlocking that private sector investment and choosing the right technology that’s going to be powering the trains over the next three to four years and then is going to be sustainable [long term]. If it’s a 30-year asset it’s got to be sustainable for those 30 years or be capable of conversion at a later date.” IRJ