Rolling into Paris on October 7 after travelling through 26 countries since leaving Lisbon on September 2, the Connecting Europe Express (CEE) completed a journey that was a once in a lifetime opportunity but should also, in theory at least, be an everyday possibility. David Burroughs, who travelled on the train from Berlin to Hamburg and Copenhagen, and from Brussels to Bettembourg, explains some of the early lessons from the journey. 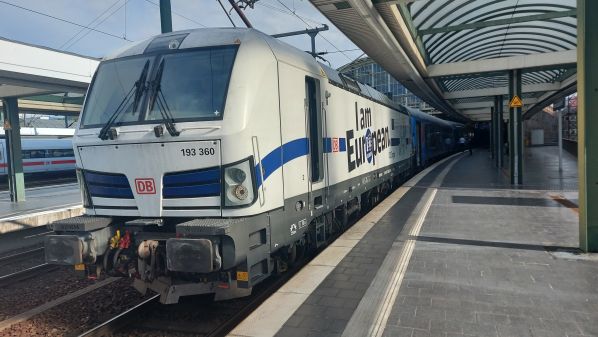 BORN out of the necessity to cancel the 2020 TEN-T Days conference due to the Covid-19 pandemic, the Connecting Europe Express (CEE) was initially designed as a way of taking the biennial conference on the road to various member states. But what it evolved into was a flagship event for the European Year of Rail, a showcase of rail’s ability to connect countries across the length and breadth of the European Union.

With the challenge of organising the train handed to the Community of European Railway and Infrastructure Companies (CER), successful operation required the cooperation of more than 40 organisations, something that European Commissioner for transport, Ms Adina Vălean, is keen to see happen more often.

“What I would like to see is this type of cooperation in building the common European rail area, because it was very positive to see all stakeholders coming together for this project,” she told IRJ in Brussels. “But in real life, we need to offer this kind of service to passengers, and we need to increase the share of freight shipped by rail.”

Vălean says that requires the implementation of the Fourth Railway Package, along with liberalisation, standardisation and digitisation. “We need a single digital space with dynamic information, for example if you are talking about ticketing,” she says. “This would mean that we need to cooperate more and be willing to share information. And this is something which we know from experience is a matter of trust, but I hope this kind of project where they had to work together to make a train move across the border is an opportunity to build trust between the various stakeholders.”

This requirement for three different trains highlights one of the major challenges of operating cross-border in certain parts of Europe. Projects such as the Rail Baltica high-speed line and the proposed high-speed connection between Portugal and Spain would go some way to addressing this, but in many locations, additional locomotives, wagons and coaches, or gauge-changing equipment, are required to provide a cross-border service.

Much of the organisation of the CEE was undertaken by Mr Libor Lochman, the former executive director of CER. “Because I was the director, I was able to connect the people, so I started on this project at the CER,” he told IRJ onboard the CEE. “Since I have known for a few years that I would be leaving CER at the end of 2020, I agreed with the new executive director that I would keep this role of managing the whole project after leaving CER. [I was] connected on one side with the commissioner, and on the other side with the infrastructure managers, [operators], and the providers of the coaches to make it ready for the trip we have here today.”

Lochman says he began organising the train in November 2020, with an initial plan to operate it in June and July 2021. “The most challenging part was really the administrative part of the process, to guarantee that we will have coaches, all the authorisations to run, all the pass locations that we needed, all the connectivity with these events in various places,” Lochman says. Organising this during a pandemic added an additional layer of complexity as it all had to be done online instead of in-person.

“More difficult was to obtain all the authorisations for running across Europe with a set of coaches from six different countries,” he says. “We have not been able to use any super modern coaches because they have restricted authorisation for the defined area of use. Those new coaches are subject to the new regulations [which] say that you have to authorise them country by country. Gaining the authorisation in the six-month timeframe would not be possible.”

Instead, the train comprised coaches authorised under the International Carriage Regulations (RIC) regime, which was in place before the implementation of the Second Railway Package and allowed authorisation across all countries part of or subject to the RIC agreement. This highlights another major challenge in operating a cross-border service in Europe, despite the provisions included in the Fourth Railway package which centralises authorisation of coaches under the European Union Agency for Railways (ERA).

Lochman says a manufacturer could in theory ask for blanket authorisation across the 25 countries covered by the ERA, but adds operators would not be interested in the additional costs this would involve when they may only want to operate them in a few countries.

“This is the case of most of the regional rolling stock today, which when ordered from the suppliers’ factories is mostly customised for a certain area of use,” he says. “You don’t plan to move the same vehicles somewhere thousands of kilometres away and place them into service somewhere else. It’s up to the market because the industry will just follow the orders. If there are potential market opportunities to operate across various borders, not just one or two but multiple borders, then of course [the manufacturers] will be interested in building the vehicles with pan-European authorisation. But if it’s not going to be the case, then we will see still limited use of this.”

Lochman says planning and operating the train has also highlighted other issues such as the availability of traction vehicles and the TSI provision to operate through long tunnels, which will be included in a report that he will draft on the process.

A statement published by the European Commission and CER to mark the CEE’s arrival in Paris outlined other initial conclusions drawn during the journey:

Current CER executive director, Mr Alberto Mazzola, says the train has garnered a lot of political interest, with ministers and mayors in the countries and cities through which it travelled reacting positively to what rail can achieve. “In their speeches, each of them engaged in favour of railways,” he says. “There is high expectation of what we can do. Now it’s up to not just the railways to deliver, but also the policy stakeholders and political people.”

Mazzola says the train also highlighted the need to update cross-border connections. “We showed that we can run around Europe, so there are connections, but they are not up to date,” he says. “And the time that it took also to do certain parts, you can see how much you can improve.”

This includes completing the TEN-T network, which he says requires more investment. The European Union, through the Connecting Europe Facility, Cohesion Fund, and the Recovery EU funds, has committed €120bn to rail this year, but this only covers part of the €350bn required to complete the core TEN-T network. Still, the funding allocated is three times the average amount committed over the past seven years, which Mazzola says is a huge show of trust in the rail system.

Lochman says that ultimately, the CEE has achieved what it set out to do, by promoting rail across Europe. “When you can see the train running through cross Europe, a nice blue train attracting number of the attention from the public, general public and the politicians, it will stay in the minds for some time,” he says. “That’s very positive, because it shows that the rail can deliver. Then the other thing is that there are certain lessons that we have to discuss with the European Commission and the European Union Agency for Railways. How to fix the bugs in the regulations that are preventing the services rather than helping the services.”

“There was a bit of doubt I detected from many people before,” Mazzola says. “Many people thought that we’d have problems along the way, and we have had small problems, but they are normal problems. The train is running on time, it’s clean, it’s safe, it’s what you would expect from a train.”

The discussions and lessons learned during the journey show the rail sector is not blind to the challenges that it faces, and it is also making some strides towards developing and implementing the solutions to these problems. But it must get on with tackling the problems while the momentum is fresh if the CEE is to have a truly lasting legacy. Otherwise, the sector risks repeating the same discussions in the years to come.