The digital automatic coupler is reaching maturity, with plans forming to roll out the technology across hundreds of thousands of wagons used across Europe. Simon Artymiuk and David Burroughs consider progress, and the challenges still facing this ambitious project. 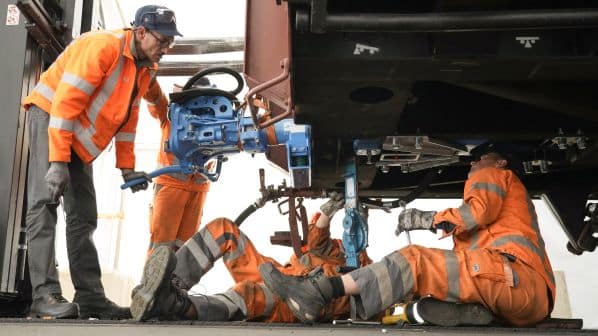 DB will use 150 “pop-up workshops” to prepare its freight wagon fleet for the introduction of DAC, beginning from next year. Photo: DB/Oliver Lang

THE digital automatic coupler (DAC) was at the fore at InnoTrans, with major suppliers including Voith, Knorr-Bremse, Dellner and Wabtec all displaying the fruits of their work to develop the technology. German Rail (DB) also showed examples of DAC fitted to rolling stock at the exhibition’s outside track area.

DAC aims to simplify rail freight transport in Europe by speeding up handling, operation and turnaround cycles. With a design based on the type 10 Scharfenberg coupler, DAC offers automatic connection of brake pipes along with electrical systems.

In total, DAC is estimated to reduce the time needed to marshal a typical freight train by around 40 minutes. The technology will also improve braking, remove the need for manual brake tests, detect and prevent wheel flats, and increase capacity by enabling heavier trains to operate closer together.

Voith says that its CargoFlex coupler has been in use with Swiss Federal Railways (SBB) Cargo for seven years, with visitors to InnoTrans being told SBB has found it increasingly difficult to recruit the staff needed to couple wagons in the traditional way.

Voith says the complexity of the work needed to develop DAC has required the cooperation of many parties. It recently began cooperating with DB Cargo and further strategic partnerships are expected.

German Rail (DB) announced in October that it will use 150 “pop-up workshops” to prepare its freight wagon fleet for the introduction of DAC, beginning next year. Retrofitting DAC to wagons will be carried out in DB’s own maintenance depots and using the pop-up workshops - portable maintenance tents set up close to where the wagons are actually used - in order to limit the amount of time that vehicles are unavailable. DB says that while the conversion process is underway, measures will need to be in place to ensure that operation continues despite there being two incompatible coupling systems in use, screw couplers and DAC.

One of the obvious challenges to the successful deployment of DAC is replacing a technology that has been standard across the continent for decades while ensuring freight services continue uninterrupted.

The mechanical element of DAC has already been set and standardised, Wabtec vice-president, international freight components, Mr Bruno Lecomble, explained, but work is ongoing to standardise the coupler height and the electrical coupler that will be used alongside the mechanical coupler.

The mechanical coupler will be no more than 200mm high, Lecomble explains, as this will support installation on car transporter wagons which need lower coupling heights to allow cars to be driven from one wagon to the next as they are loaded.

Standardisation of the electrical contacts and communication protocols are also under discussion by the four major suppliers.

Alongside the standardisation of the technology, Lecomble says the operational processes also need to be modernised and standardised, as these can often vary from country to country or even between depots.

“There is a necessary prerequisite to harmonise these operational processes at a European level,” Lecomble says. “Once set, we’ll then be able to standardise not only the DAC but also digital automated freight train operation.”

However, the challenges go beyond standardising the technology and operating process. First and foremost is funding: Lecomble says it could cost €10-12bn to complete the retrofitting of the entire European wagon fleet. Second are the changes to business models required to adapt to the new operating processes. Third is the migration strategy.

Who pays for the wagon upgrade is still a matter for debate and discussion. The situation is complicated by how the benefits of introducing DAC are distributed. Wagon owners and rolling stock leasing companies are usually expected to cover the cost of upgrades such as the installation of new brakes. However, while they will see some benefits from introducing DAC, it is operators, infrastructure managers and freight shippers who are set to gain the most. Operators will benefit from higher payloads; infrastructure managers from less track damage due to fewer derailments and increased revenue from track access charges as more freight trains can be operated; and shippers from DAC’s capability to offer more accurate predictions of where their freight is and when it will arrive, by enabling each wagon to be fitted with digital equipment.

To determine how the costs are allocated between market players, and to ensure investors in DAC see a return, Europe’s Rail joint venture Work Package 5 (WP5) is undertaking a series of economic analyses of the costs and benefits of introducing DAC in Europe.

Falling within the European DAC Delivery Programme (EDDP), WP5 is a cost:benefit analysis (CBA) performed under the leadership of DG-Move together with Europe’s Rail, the European Union Agency for Railways (ERA), and other members of WP5, with the support of an external contractor.

The study is expected to be completed by the end of the year, and covers the different elements in relation to the capital investment and operating expenditure of DAC deployment; the impact on operation during the migration; the distribution of costs and benefits between the different stakeholders; and a series of other assumptions resulting from other EDDP work.

The CBA is complimented by a first migration plan, which is designed within WP3 and the Europe’s Rail DACcelerate project, as well as an investment plan assessing the different opportunities to fund and finance DAC deployment, the first version of which is also expected to be ready by the end of the year.
The migration strategy is required to successfully retrofit the estimated 460,000-500,000 wagons and 17,000 locomotives within the six-year timeframe set by the sector. Setting and delivering this strategy could ultimately make or break the DAC project.

“There is a European consensus to double rail freight’s modal share by 2030, from 18% to 30%,” Lecomble says. “You cannot do that with the existing assets. So you have to make freight train operation more efficient and safer, and this can only be done with the DAC.”

A new electric contact coupler (e-coupler) for DAC was displayed at InnoTrans by Knorr-Bremse, which said connecting power and data lines along the length of a freight train was essential for digitised, intelligent and competitive rail freight.

Knorr-Bremse says its e-coupler is the first concept to satisfy all the requirements of the European DAC Delivery Programme (EDDP) specifications, which include restricted dimensions, high resistance to weather, and the ability to establish a connection between the delicate electrical contacts on two wagons safely and gently during the coupling process. Together, the DAC and the mounted e-coupler must not extend more than 200mm from the centre of the coupler head.

“Shifting from a fixed to a movable version of the e-coupler turned out to be a crucial step in the development process,” says Mr Nils Möhle, director of coupler development at Knorr-Bremse Rail Vehicle Systems. “This approach meant we could minimise its overall height and make it less susceptible to wear, because the electrical contact block retracts during the mechanical coupling process and then closes the electrical connection by engaging with its counterpart in a very controlled way.” An additional cover protects the e-coupler from cargo accidentally falling from above.

Knorr-Bremse has submitted the design to Europe’s Rail Joint Undertaking, which is tasked with preparing for series production an interoperable DAC that will be compatible with the fleets of all EU-based operators. Knorr-Bremse will also subject the e-coupler design to intensive testing in the company’s coupler test facility in Budapest, with the aim of optimising it even further.