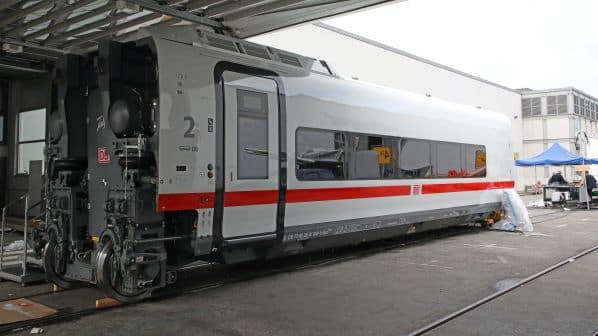 AT this year’s InnoTrans transport fair in Berlin, German Rail (DB) showcased a coach for its new ICE L low-floor long-distance trains currently being built by Talgo of Spain.

These trains will replace old Intercity (IC) trains on certain DB services, principally on the year-round Berlin - Amsterdam route, and will help to substantially reduce the journey time between the two capital cities.

The 230km/h trains will also supplement 160km/h Intercity 2 double-deck trains used on non-electrified lines. Other suggested routes are on the winter ski tourism service from Cologne to Obersdorf in the Bavarian Alps, and on summer tourist services from Berlin, Cologne and Karlsruhe to Westerland (Sylt) on the North Sea coast of Schleswig-Holstein. Further domestic routes within Germany, and also connecting German cities to destinations in the Netherlands, Austria and on the Swiss border, are likely to follow.

The €550m framework agreement with Talgo was signed in February 2019 under which the manufacturer will supply 23 ICE L trains each comprising one locomotive and 17 articulated coaches, reaching a length of 256m. Each train will have 562 seats, with 477 of those in second class and 85 in first class.

Manufacturing of the multi-system locomotives is underway at Las Matas near Madrid and the first units are currently undergoing static testing.

The train’s design was originally presented to the public in 2019 under the working title of ECx, while the units are referred to by the Spanish manufacturer as Talgo 230. The concept was rebranded as ICE L in 2021, with the L standing for low floor. The trains will offer step-free access to all doors from standard platforms with a height of 76cm to accommodate passengers in wheelchairs or with reduced mobility.

When the trains enter service during the second half of 2024 they will feature an on-board restaurant with both seating and standing areas, a spacious toddler and family area, three spaces per train for wheelchairs, and eight bicycle spaces.

A novel feature of the Talgo articulated cars is that each unit is attached to the next with a single-axle bogie, with double-axle bogies only present at each end of the consist. Visitors to InnoTrans were able to examine the complex inner workings of the articulation system at one end of the car on display.

The single-axle coach construction - meaning each train will have a total of 20 axles in addition to those of the Talgo Travca locomotive to be supplied with each consist - allows for a total weight of 425 tonnes, making each ICE L train slightly lighter than a shorter seven-car ICE 4 train - a factor which DB says will reduce emissions by lowering energy consumption. This goal is also the aim hoped for with the aerodynamically optimised exterior design of the cars.

DB adds that the train units will set new standards in comfort and accessibility. In addition to the low-floor entry at all doors, the trains have a new interior design featuring ergonomically comfortable seats, frequency-transparent windows to improve mobile phone reception, and touch-free control elements in all the toilet compartments.

The passenger coach with the three wheelchair spaces will have height-adjustable tables while the train also has a tactile guidance system providing information in Braile to assist people with impaired vision. The design of the trains will also aim to help those passengers with bulky and heavy luggage or winter sports equipment by providing outsize luggage storage space in each car. There will also be areas of the train specifically aimed at families with children and people needing walkers for mobility.

The coaches will also have various lighting modes for use throughout the day, information monitors in entryways and seating areas displaying real-time data, and Wi-Fi and onboard entertainments systems.

“Level access on the ICE L sets standards that we from now on want to pursue in vehicle concepts of the future in long-distance transportation,” says DB CEO for long-distance passenger transport and member of the board of directors, Dr Michael Peterson. “We are making rail travel even more inclusive and comfortable. In addition to level access, our customers will also experience the new ICE interior design on the ICE L. A living room atmosphere on rails is only possible when travelling with DB.”