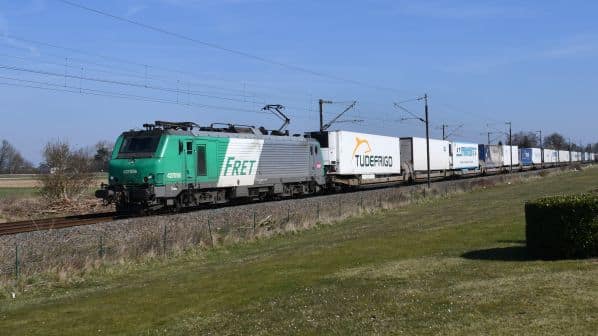 OPTIMISM was the order of the day at the annual conference of rail freight lobby Objectif OFP held in Paris on November 23. In the opening exchanges participants heard that newly available Transport Ministry figures for 2021 showed that rail’s share of freight in France had risen from 9% to 10.7%, an important step in the government’s policy of doubling rail’s market share to 18% by 2030.

Results for 2022 are looking good too - French National Railways (SNCF) says its subsidiary VIIA, which operates piggyback Autoroute Ferroviaire services, is expected to report turnover of €150m in 2022 compared with €50m in 2019.

VIIA has just launched a new service from the Mediterranean port of Sète to Valenton (Paris) under contract to the government. Further new services are expected to be launched in the next couple of years, including from Cherbourg to Bayonne in 2024, and VIIA hopes it can soon restart its suspended Calais and Aiton - Orbassano (Turin) services. A major boost should come from construction by 2026 of a new rail terminal at Rungis, the Paris wholesale food market.

Mr Aurélien Barbé, head of national intermodal transport group GNTC, said that the target of tripling intermodal traffic by 2030 is achievable under certain conditions: better and faster long-distance train paths, more terminals and the continuation of a subsidy for loading and unloading of a container, swap body or semi-trailer after 2025 when the current regime ends. According to Barbé, 15 new terminals will be needed to reach traffic growth targets, and the GNTC is currently studying where these should be located.

RegioRail, owned by Belgian and US investors, has recently reported a 13% rise in revenue for 2022 thanks to new services and extra business from existing customers. The company has increased revenue by 20% between 2018 and 2021 despite the Covid-19 pandemic and believes that it can reach €50m in turnover - another 60% increase - within three or four years.

The formation of new private operator Logi-Railway was announced just before the conference. The company, owned by four shareholders already involved in logistics, is taking over traffic from Sécurail, and has started activities at the Champigneulles (Nancy) container terminal. Logi-Railway expects to rapidly launch a Champigneulles - Bayonne service for a logistics company which cannot recruit lorry drivers, then another from Bayonne to Le Havre.

However, the sense of optimism was tempered by several notes of caution.

The conference heard how a looming recession could be a serious setback to France’s rail freight ambitions - directors of France’s biggest quarry near Calais said that traffic had already plateaued.

In addition, too many distribution centres are still being built in France without rail access.

Participants also continued to criticise the government’s contract with infrastructure manager SNCF Network. Estimates state that another €1.3bn still needs to be found to meet the objective of doubling freight traffic. And although the government is granting €170m to freight operators as part of the post-Covid “relaunch plan,” most of this is being eaten up by higher energy costs.

Nevertheless, the government's policy of doubling rail freight seems to have galvanised many industry players and plans for expansion abound.

The Aix-Marseille-Provence conurbation has announced plans to build several new rail terminals around Marseille and to connect them with up to 22 daily short-haul rail services by 2026. The Open Modal group is building a new computer-controlled terminal north of Fos-sur-Mer which will allow the company to lengthen trains and improve reliability, as well as launch additional services. The managers of the Dourges terminal near Lille are studying a near doubling in size. These and many more projects are being driven by the realisation that rail must take traffic off the roads for environmental reasons. The chronic shortage of truck drivers across Europe is also playing a part.

The prospects for further growth in 2023 and beyond will depend largely on the extent of the forecast recession in Europe and on the price of energy next year and beyond. Production of steel and aluminium, on which Fret SNCF depends more than its competitors, has already been scaled back at some plants. In the longer term, intermodal traffic, from which much of the growth is expected, will depend on sales of consumer goods. Operators and the French government will be crossing their fingers.