Just a handful of more than 400 privately-backed station redevelopment projects have progressed as planned since the programme was conceived in 2014. 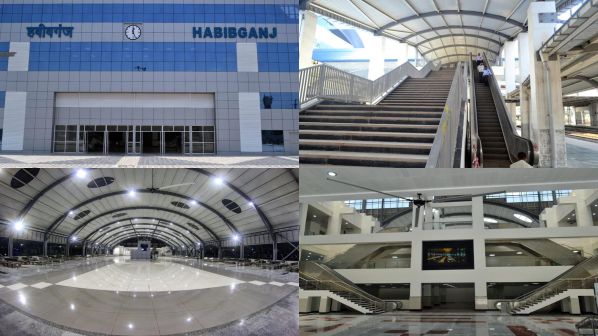 Habibhanj station is one of the few projects to proceed as planned.

INDIAN Railways’ (IR) much publicised plan to redevelop stations and create “world class infrastructure” through the infusion of private funds has not taken off as planned, Srinand Jha reports.

Six years after the award of a Rs 1.3bn ($US 17m) contract for the Habibganj station in the central state of Madhya Pradesh, IR has been unable to either attract private funds or overcome the legal, administrative, or institutional hurdles between municipal, state, or federal authorities to start execution work at other stations identified in the programme.

IR initially earmarked 403 major stations for redevelopment on a public-private partnership (PPP) basis through a revenue sharing model as part of its non-fare revenue scheme. Of the 7325 railway stations on IR’s 67,956 route-km network, IR identified 123 stations as suitable for refurbishment work after the IR Station Development Corporation (IRSDC) - an Indian Railways special purpose vehicle - was set up in 2014. Of the IRSDC’s ongoing projects for the makeover of five stations (Habibganj, Gandhinagar, Anand Vihar, Bijwasan and Chandigarh) contracts for two (Anand Vihar and Chandigarh) were recently cancelled, while construction work is yet to begin on the third: the greenfield Bijwasan station.

Gandhinagar station - where a five-star hotel and conference centre are being built using Rs 8bn of public funds - has been at the heart of the storm over cost escalations. “The station redevelopment plan was conceived to generate additional financial resources for the organisation and not to splurge taxpayers’ money on fancy schemes,” a former railway official said.

IRSDC currently has 10 projects in the immediate planning stages and 61 projects overall. However, only Habibganj station stands out as a success.

Nagpur, Gwalior, Amritsar, Surat and Kanpur stations are all slated for redevelopment but meaningful progress on these respective projects is slow. Plans to add new stations to the list have also been announced on occasion; a recent declaration vowed to modernise a raft of stations including Versova, Dadar and Kalyan in the Mumbai area. However, IRSDC has a poor contract management record; a right to information (RTI) query on January 14 2021 found that 24 tenders have been issued in the last six years, but only five were finalised.

The RTI response also reveals that more than Rs 1bn was spent during the same period by IRSDC and its affiliate, the Rail Land Development Authority, on office expenses and payments to consultants.

IRSDC’s managing director and CEO, Mr Sanjeev Kumar Lohia, says executing brownfield projects is a complex and time-consuming task, while the Covid-19 situation has caused additional delays. “But we are now ready to move forward quickly, after the user charges are notified,” he says.

User charges are already incorporated in railway tickets and any hike in these charges will need approval from the Union Cabinet. However, the Indian government is unlikely to raise charges for rail users due to the widespread protests that such a decision could provoke.