Is the German concession model in danger?

The German government is covering the cost of 3100 staff working on Abellio’s regional services in Germany after Netherlands Railways’ (NS) subsidiary entered a court-mandated restructuring. The situation could have wider ramifications for the future of the German regional market, as Keith Fender explains. 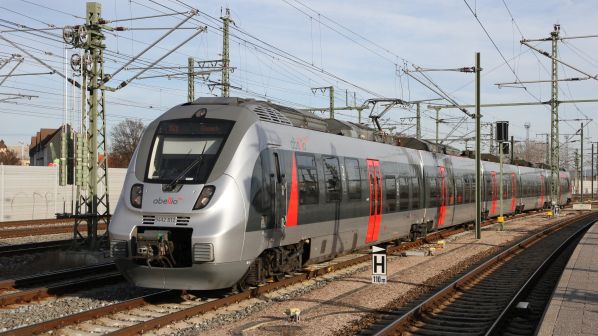 Abellio lost €32.7m in Germany last year and is now in a process of administered restructuring.
Photo Credit: Keith Fender

THE application to a Berlin court at the end of June by Netherlands Railways’ (NS) subsidiary Abellio for protection from its creditors while it placed itself under a court-administered restructuring known as the “protective shield process” has sent shockwaves through the German rail industry.

Abellio cites structural problems in the German regional concessions market for its decision to restructure the business. Abellio managers are now working alongside administrators appointed by the court while the German government picks up the cost of salaries of 3100 employees for three months.

The German regional model was developed under the rail reforms of the mid-1990s as Germany became the first large European country to adopt the large-scale tendering of regional rail services, typically under 10 to 15-year contracts, which has since been replicated in multiple other European countries.

The system is credited with increasing overall passenger numbers and raising standards by introducing new fleets. Non-incumbent operators now run 40% of Germany’s regional trains with German Rail (DB) responsible for the remainder. Both Netinera (Trenitalia) and Keolis (SNCF) are subsidiaries of other state-owned national railways while private operators such as Transdev, Vias and BeNEX have all had varying levels of success.

Competing bids have also pushed down the overall cost of contracts. And with the federal government sustaining the levels of annual grants paid to state governments, transport authorities have been able to purchase more train-km - around 700 million additional train-km per year since tendering began.

Evolution of the market has led to significant changes at DB. After regularly losing contracts in the early years to new entrants, which had much lower overheads than DB, the incumbent had to adapt. DB has used new “start-up” operating companies to present a more cost-effective offers, and while continuing to benefit from better financing conditions for rolling stock. DB has also increasingly accepted the requirements to use train fleets owned or specified by regional transport authorities. As a result, DB won back 11 of 20 contracts let in 2019 and 10 of 13 in 2020 although new entrants have won the majority of those awarded this year.

The Covid-19 pandemic though presents perhaps the biggest challenge to the system since it was conceived. Abellio is not the first operator to have had financial problems over the past 25 years - some German operators have ceased operation in the past. However, the scale of its recent problems may have far reaching implications in the current climate.

The pandemic has left some big gaps in budgets for regional governments using the more common gross contracts. Here the awarding transport authority or regional government takes all the revenue risk, but the operator will only make a profit if its cost estimation and control is effective. In most cases, train operators have been asked to run most of the contracted services, meaning payments per train-km have continued, but fare revenue has been significantly reduced, resulting in both central and regional governments providing transport authorities with substantial additional funding to cover some, but not all, of the fare revenue lost.

Abellio’s problems were laid bare in a letter from Dutch finance minister, Mr Wopke Hoekstra, to German state premiers in June, prior to Abellio’s insolvency protection. They include increased wage costs for train drivers and other staff plus training and recruitment costs due to a national shortage of train drivers in Germany. The operator is also suffering from compensation costs relating to delays, often caused by infrastructure failings or improvement activities (see panel).

The letter says these costs were “not foreseeable” when the various contracts were agreed, although as Abellio has been active in the German market since 2005, most observers, including the state transport authorities concerned, find this hard to understand.

“Abellio cannot survive without compensation for the additional costs,” Hoekstra wrote, stating that it has been supported to date by its owner NS, and by extension the Dutch state. “NS informed me that if a timely solution is not found, the company will be forced to reconsider its further involvement in the individual [German] regions.”

DB Regio made an Ebit loss of €451m but can rely on the support of the German state. Private operators inevitably do not have such deep pockets and Abellio is not alone in experiencing financial and practical difficulties over the past year (IRJ September 2020, p26). However, it is the only major operator to seek insolvency protection. Others are choosing to bear the cost in the short-medium term while restructuring their activities to achieve longer term profitability.

Nevertheless, representative bodies have sought to present Abellio’s problems as indicative of a threat to the entire concession system, or at least a threat of a return to the position where only DB can win contracts.

Mofair, which represents German private operators, has blamed the problems on the success of German rail unions in negotiating pay increases as well as the failure of national rail infrastructure manager DB Networks to maintain the network. Mofair also complains that DB Networks has increased access charges for regional trains, upping the costs for regional operators, which unlike long distance and freight providers, are not benefitting from any pandemic related discounts or free usage.

Mofair cites the prescriptive involvement of regional transport authorities and their provision of train fleets, often with pre-arranged maintenance, as another issue that is reducing the scope for rail operators to innovate or economise. It argues that this is leading to tender bids that are largely driven by costs outside the direct control of the bidders. Such external factors have been acknowledged in contracts awarded in 2021 in Bavaria where the state government will fund major changes in employee, energy, and infrastructure costs as the price for agreeing contracts where it does not assume all revenue risk. Mofair also acknowledges that high numbers of bidders for specific contracts may have led to over ambitious offers by some players.

Brussels-based AllRail, which represents private operators across Europe, has drawn attention to the “unprecedented and probably unwise intervention” of the Dutch government on behalf of Abellio.

AllRail points out that while Abellio has won contracts in Germany and Britain, the vast majority of the Dutch domestic rail market is covered by a single directly awarded contract with Abellio’s owner NS. AllRail says the cross subsidies implicit in the NS national concession contract have provided the financial headroom for Abellio’s expansion into neighbouring countries while restricting access to other operators in the Dutch market. AllRail argues that if Abellio is to be given extra money in Germany, then NS’s home market should be exposed to full competition, something DB would no doubt welcome as its Arriva subsidiary already operates some Dutch contracts.

Entirely private companies such as BeNEX and public-private-owned operators including Vias and Transdev have all bid for and won German contracts this year alongside wholly public sector owned companies such as DB Regio and Hessische Landesbahn. The appetite among operators for revenue risk is very low in the post-pandemic environment, although concessions can be made to work as shown in Bavaria. Private companies such as National Express also continue to regard the German market as attractive with National Express telling investment analysts in March 2021 that it intends to capitalise on its competitive position and bid for more German rail contracts. Whether Abellio is the ‘canary in the coal mine for the entire industry, or just an individual example of miscalculated cost estimates, or poorly planned contract mobilisation, will become clearer in the next year or two.

IN the southern state of Baden-Württemberg, Abellio’s Neckar Valley contracts around Stuttgart have experienced multiple problems, but especially a lack of train crew and the very late delivery of Talent EMUs by Bombardier (now Alstom).

However, the long-serving state transport minister, Mr Winfried Hermann, rejected Hoekstra’s argument for contract revisions, saying that changes are only legally permitted “to a very limited extent, if at all.” Abellio and British group Go-Ahead share Baden-Württemberg’s largest contracts, which were competitively tendered and awarded in late 2015, beginning operation in 2019-2020. At the time Hermann said the new bidders had both offered rates around half the previous €11.69 per train-km rate that DB Regio had paid since 2003.

In Germany’s most populous state, North Rhine Westphalia, where Abellio has been active since 2005, the company took over operation of three S-Bahn routes in late 2019 under a 15-year contract. However, it was soon experiencing substantial problems due to a shortage of drivers. Former DB Regio drivers are not required to transfer to the new operator. Abellio partly mitigated the issue by subcontracting operation of one route. But despite using contract staff and hiring locomotive-hauled substitute trains from private operators, service reliability deteriorated with significant levels of cancellation and delays.

Rhine-Ruhr Transport Association (VRR) told Abellio in May 2020 that the “bad and unacceptable level of service, especially for the S-Bahn lines” needed to be remedied by July 2020 at the latest. Abellio was also forced to subcontract Rhine-Ruhr Express (RRX) services to DB Regio in mid-2020 due to insufficient drivers.

The problems are not limited to Abellio. In May 2020 Go-Ahead informed the London Stock Exchange that it would make ”material” losses from its Baden-Württemberg contracts, which represent 9.8 million train-km annually, due to the late delivery of trains. The company confirmed that a comprehensive review of its German rail business is underway including an assessment of longer-term financial expectations.

Go-Ahead has subsequently changed much of its senior management in Germany and agreed to sub-contract some Baden-Württemberg services to another operator following an initial period of operation substantially below the contracted level. Go-Ahead ran 17 driver training courses prior to starting operation but the company still did not have enough staff to operate the contracted timetable. It has also announced the founding of its own driver academy. In March 2021 Go-Ahead announced a £25.9m provision for future losses on two new contracts worth a combined 10 million train-km annually in Bavaria, which do not start until 2023.