IRJ joins the open-access operator for the inaugural trip on Britain’s East Coast Main Line and learns about its inventive approach to passenger service. 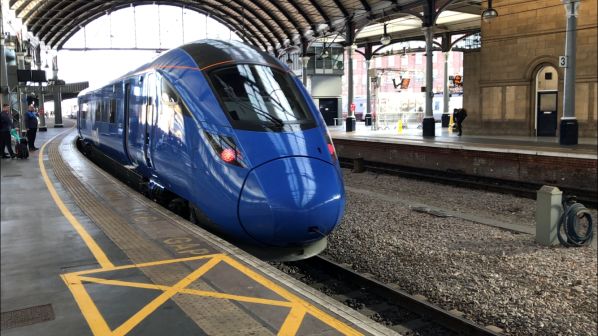 “THIS has been five years in the making and it is something we are really proud of,” Mr Steve Montgomery, FirstGroup Rail managing director, told the launch event for Lumo, Britain’s latest open-access passenger operator, at London King’s Cross on October 21.

“This is about attracting new passengers to rail. We believe that the offer we provide our passengers will be different to what they already receive and that we can be competitive with airlines travelling between London and Edinburgh.”

Montgomery was speaking to a packed platform of representatives from partners, the wider rail industry and media at King’s Cross ahead of the inaugural run of the train up the East Coast Main Line (ECML) to Edinburgh Waverley. Regular passenger operation on commenced on October 25 with the FirstGroup subsidiary initially offering two daily return trips on Sunday - Friday, and one train each way on Saturdays, calling at Stevenage (on one southbound journey Sunday - Friday), Newcastle, Morpeth, and Edinburgh for an approximate 4h 30min journey time. This will increase to four return trips in December and five daily return trains in May 2022.

The fourth of five five-car class 803 EMUs built by Hitachi Rail in Newton Aycliffe was delivered to Lumo on October 22 and the fifth train is scheduled to be handed over on December 22. The £100m fleet is financed by Beacon Rail and the trains are the first of the 80X series that are not fitted with a diesel engine, with an auxiliary battery able to offer four hours of hotel power should the train fail. Each train has 398 seats and four tip seats and there is a single class, reflecting the operator’s desire to offer a high level of service to all passengers and to avoid an “outdated” classification system.

The use of solely electric traction is consistent with Lumo’s focus on sustainability, which is emphasised in its marketing message. Lumo is targeting new rail users, especially those who might be inclined to fly rather than use the train. Each of the station stops is located close to a regional airport - Stevenage at Luton, Newcastle, and Morpeth at either Newcastle or Edinburgh - and early marketing campaigns are targeting people who use the airport. Lumo will also operate the first and last train from London to reach Edinburgh each day, with an early morning service arriving before 10.00, opening up a potentially attractive journey not previously available. Discussions are also underway with Network Rail to deliver improvements in journey time, including a potential 15-minute reduction in May 2022.

Both Montgomery and Ms Helen Wylde, Lumo managing director, emphasised in their speeches during the opening event that just 8% of the British population is a regular rail user. In the brief for the new service, Wylde said Lumo was tasked with finding out why and to come up with an offer that can “reimagine rail” and realise this potential to grow use.

Lumo is aiming to create an additional 13 million passenger rail journeys in the next decade and has reported an encouraging start with 90% of its initial tickets already sold. Speaking to IRJ on the inaugural train, Wylde said it is the company’s objective to sell as many of the 1 million tickets that will be available in its first year as possible. Central to its offer is affordability - 90% of the initial batch for the first six weeks of operation have been available at a discounted rate of £19.90 if purchased through the Lumo App. After this opening offer at the beginning of December, 60% of all tickets will be available for £30 or less. The most expensive walk-up dedicated tickets will be £69 and one unreserved coach will be available for passengers with inter-available peak or off-peak tickets. “We want to offer fares that are fair,” Wylde says.

There is also a refreshing approach to customer service. Rather than looking at demographics when identifying its target market, Wylde says the focus is on passenger behaviour. The first thing a prospective passenger is asked when purchasing a ticket is the reason they are travelling. Wylde says this will help to allocate seat reservations in appropriate areas of the train, keeping jubilant football fans away from families with young children, for example.

“One of the reasons that people don’t travel at the moment is that they are worried about it,” Wylde says. “If you are in the car with two small children, to a certain extent you are in control. If you come onto a public service, you have a baby and a young child, it can be quite tough… we are looking at who we have got onboard today and thinking about how we can make the service as good as possible for them. The airlines have done this for a long time to good effect and we want to bring that across to the rail industry.”

This approach is apparent in Lumo’s onboard offer where there is a great deal of emphasis on passenger comfort. As well as free Wi-Fi and at-seat USB and plug sockets, the seats supplied by Transcal are ergonomically designed to offer added comfort to passengers. There is more legroom than on comparable sets, good lighting, and a table at each seat that is large enough to easily accommodate a laptop.

“We don’t have a first class because we don’t need it,” Wylde says. “We want everyone to travel well, not just a handful of people. The seats are set out the same in each coach. We spent a lot of time on the design on this train with our colleagues at Hitachi and FirstGroup and user groups to make sure the design is appropriate.”

Lumo has also rethought the role of onboard staff. Rather than guards, onboard staff are called ambassadors who are trained to offer a friendly and personalised service to each passenger akin to a flight attendant. Each is armed with a tablet, which offers up-to-date journey information as well as information specific to a certain passenger. Wylde says this is particularly helpful to meet the needs of disabled passengers who need extra assistance including those without a visible disability, and the elderly.

“If we want an active elderly population, we need to make sure they are comfortable,” Wylde says. “That they know when their stop is coming up. If they have reduced mobility, they can get to the door in time, and if they need help with their luggage, we are there to help them.”

The ambassadors will also have details of pre-booked meals from reputable high-street outlets that Lumo has partnered with including Marks and Spencer and Pret. These meals are delivered to the passenger’s seat with an emphasis on sustainability in the menu.

Lumo has recruited ambassadors from both within the rail industry as well as outside, taking advantage of job losses at airlines, in retail and hospitality during the pandemic, and gaining what Wylde describes as a high level of customer service skills. Around 720 people attended an assessment day to apply for roles with Lumo and those who are successful as well as completing a 12-week training programme, are enrolled on an apprenticeship scheme, offering a career path not always available in other sectors.

Wylde says more than £15m has been spent on IT for the project and describes Lumo as a completely digital operation - she says the prompt she used for her speech is the only piece of paper in the company. Getting new backend systems to work and overlay with the industry systems was a major part of this process. And while recognising that some passengers will always want a paper ticket, there is an emphasis on digital ticketing and passengers engaging with Lumo digitally on the company’s website or smartphone app, whether that is buying their ticket or ordering their food.

Lumo is also seeking to offer passengers greater flexibility in their bookings. Mr Phil Cameron, commercial projects director at First Rail, says work is underway to allow passengers to book their journey up to 12 months in advance rather than 12 weeks, which is currently permitted.

“We will have your details and when it gets closer to the day of travel, we can contact the passenger to confirm they want to keep the booking, or if they want to change it,” Cameron says. “Equally, if there is a problem with the booking, we can ask whether they want to travel on a different day and that we have this train available. It is more of conversation, like you would have with an airline. We want to make travelling with us as straightforward as possible.”

The pandemic inevitably presented challenges to Lumo as it went about building the team and working towards the launch date. Wylde says the requirement to work remotely may have actually helped the operator with its digital transition and the adoption of new working processes, including online training.

Montgomery says First is fortunate that the launch has happened in October 2021 towards the backend of the pandemic when restrictions have been eased. “I think if it had been a year ago, we would have been more worried,” he told IRJ. “I think it is the right time to bring this service in because of the upsurge of demand we have seen for leisure travel. Hull Trains’ [First’s other ECML open-access operator] recovery is probably ahead of the industry and that has been really encouraging for us. The early take up of sales on Lumo is also encouraging.

“People are price conscious, but people will also pay where they have a good service and that is what we see with Hull Trains, and I think that is what we will see with Lumo. We will be selling very good value for money fares, but they will also see a high level of service.”

Montgomery also reports that the cost base of the “heavy set-up costs” for Lumo have not really changed that much as a result of the pandemic, and that the launch was on target. He also says First is looking to adopt some of the practices implemented by Lumo into its wider organisation. However, he stops short of confirming any planned expansion of service. Wylde also says the focus remains first and foremost on making a success of the initial operation, but is hopeful that if it works, there will be a case to grow the offer.

“If we make a success of this we will certainly be knocking on the door,” Wylde says. “We have got to prove that the business case for this works first.”