Cracks discovered in Britain’s Hitachi-built inter-city fleet in May 2021 prompted a review by the Office of Rail and Road into what happened. As Richard Clinnick reports, a long-term repair programme will now commence to rectify the issue. 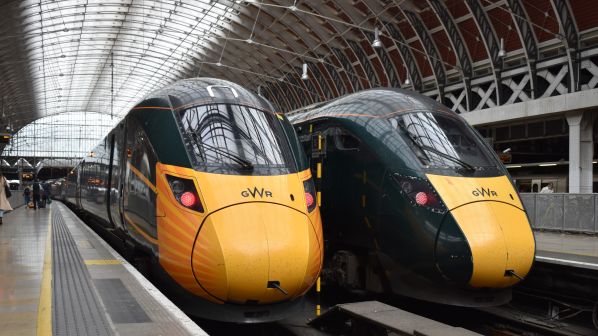 Two GWR class 800s at London Paddington, which were introduced from 2017.

MORE than 1200 class 800 series vehicles built by Hitachi for various British operators require modifications to rectify issues with cracks found on the bodyshell and anti-roll bar fixing points, according to a report published by British regulator the Office of Rail and Road on April 7. The repair programme will last for six years.

During scheduled maintenance cracks were found in the area of the bolster which is where the load of the vehicle and other forces are transferred to the bogie. Initially eight trains were affected and withdrawn from service on April 11 2021. At that point Great Western Railway (GWR) issued a National Incident Report (NIR) detailing the cracks.

On May 7 2021 further cracks were identified at the other end of the bolster assemblies, in the vicinity of the weld lines where the lifting plates attach to the bodyshell. Initial assessments found that there was a risk of the lifting plates detaching. Enough cracks were found on the 158 vehicles that make up the GWR and London North Eastern Railway (LNER) fleets that the decision was made to withdraw all 182 class 800, 801 and 802 trains used by four operators: GWR, LNER, Transpennine Express (TPE) and Hull Trains. Services were severely disrupted. But following stringent tests, most of the trains returned to traffic from May 14, enabling a reduced service level or the use of short-formed trains for a few weeks.

ScotRail (SR) class 385 AT200 EMUs and Southeastern (SE) class 395 AT300 EMUs, both built by Hitachi, were not withdrawn from service but subsequent investigation and analysis identified both the potential and actual incidences of related failures on both train fleets. They were subsequently included in the review and will also receive planned modifications. The SR trains were introduced in 2018 and operate across the Scottish central belt, while the SE fleet dates from 2007 and operates on Britain’s only high-speed line, HS1.

The ORR says in its report that there is no suggestion of problems with the infrastructure.

The 80x fleet was introduced from 2017 with GWR, and from 2019 with Hull Trains, LNER and TPE. The trains feature 26m-long vehicles rather than the 23m-long mark 3 coaches they replaced, increasing capacity, while the bi-mode capability enabled operators to take advantage of electrification.

The ORR has concluded that fatigue cracking on the vehicle body in the area above the wheels close to the yaw damper bracket and anti-roll bar fixing points was caused by the trains experiencing greater loads from train movement than allowed in their original design. The ORR says it is not yet known why this happened, although potential factors include wheel wear and track design. The ORR says in its report that there is no suggestion of problems with the infrastructure. The ORR also denies that the length of the coaches is an issue.

Additional cracks found in the area where the lifting plates attach to the vehicle body were the result of stress corrosion cracking (SCC). The ORR says this is the result of using a particular type of 7000 series aluminium in various areas of the class 800 trains.

The report says that the characteristics of the specific aluminium used in combination with built-in stresses resulting from welding to the bodyshell as well as exposure to air containing high levels of chloride resulted in the cracking. The ORR says that the British atmospheric conditions contain high levels of chloride, and this appears to have caught the industry by surprise.

Following the initial assessment it was found that a 620mm-long crack could be tolerated after investigations found that there would be no increased stresses imposed on the transverse welds and no risk of the cracks propagating into the rest of the welded structure. Further analysis discovered that stress levels within the weld material itself would remain below the value for immediate failure of the weld itself to occur for cracks up to 280mm-long. As a result of this work, Hitachi proposed a maximum permitted crack of 200mm in the affected area for trains to remain in operation. LNER subsequently introduced its own 150mm tolerance following additional analysis by Hitachi.

No yaw damper cracks were discovered on the SR fleet and so there was no requirement to withdraw those trains.

To ensure further safety improvements, the ORR is recommending that:

As part of the problem analysis, Finite Element Analysis (FEA) was carried out by Hitachi’s principal engineering team in Kasado, Japan. The process uses computerised modelling to understand the behaviour of the structure of the vehicle by considering and evaluating it as many small and simple elements. The results were combined to predict the behaviour of the vehicle.

This activity built on the work undertaken for the original vehicle design by using data from subsequent operation. Fatigue performance was considered as was the weld quality and effects of the proposed repair methods.

GWR and LNER trains were subsequently fitted with strain gauges in areas affected by the cracks. These measure the deformation of components under load and monitor the loads being imposed. Tests were conducted at speeds up to 221km/h both empty and with ballast on board to simulate a full load. Trials were repeated with worn and new wheel profiles. The tests recorded higher loads from the yaw damper and anti-roll bar than had been expected at the design stage and from the testing conducted on the first production vehicles.

A programme of repairs will be carried out on 1247 class 800 series vehicles from GWR, Hull Trains, LNER, TPE and the Lumo class 803s, which entered traffic in October-December. A further 487 class 385 and class 395 vehicles will also be treated. This does not include the class 805 and 807 fleets, which Hitachi is currently manufacturing for Avanti West Coast (AWC) with delivery of bodyshells from Japan commencing last year. However, these will be included in the repair programme, albeit towards the end of the project. The ORR says the focus will initially be on the trains which require the repairs.

The East Midlands Railway (EMR) class 810 fleet may not require the modifications as their construction is not as advanced, although the ORR has not ruled this out.

The class 800 series modifications will be carried out by Arlington Fleet Services at Eastleigh Works, Hampshire, and it is expected that at least one train will be out of service at any one time. The planned six-year timeframe is designed to ensure that service levels are not affected by a lack of available trains.

“The ORR’s report identifies that all Hitachi trains meet relevant standards and that we took the appropriate action to prioritise safety and maintain train availability.”

The ORR is working with Hitachi and partners to agree a permanent solution. Once the programme is formally agreed, work is expected to start this summer. No specific date has been confirmed.

Hitachi plans to remove the affected part of the original body structure, including the longitudinal welds where the fatigue cracks have occurred, and the mounting brackets. The structure will be rebuilt using a modified design, which provides an unchanged interface with the yaw damper bracket and anti-roll bar. The ORR says the modifications address the load capability of the design and the potential for insufficient fusion in the welded joint arising from weld design and inspection criteria.

Hitachi has also proposed adding bolts to retain the plate in the unlikely event that the welds fail completely as a result of SCC.

On April 7, GWR had only one class 800 series train out of service due to cracks, and that was the train used for the investigations. It is understood that 27 GWR trains have received repairs to cracks to enable them to continue operating.

“The ORR’s report identifies that all Hitachi trains meet relevant standards and that we took the appropriate action to prioritise safety and maintain train availability,” says a Hitachi spokesperson. “The proposed engineering solutions outlined in the report are currently being reviewed by all partners. We are working together to finalise the plan for their implementation, while always prioritising safety and train availability to support consistent passenger services.”

The class 800 series was ordered initially by the Department for Transport (DfT) as part of the Intercity Express Programme (IEP) designed to replace High Speed Trains (HST) and other fleets on the Great Western route and East Coast Main Line. Agility Trains funded the trains, with subsequent orders placed by other rolling stock leasing companies for specific operators.