David Haydock reports from Alstom’s plant at Valenciennes where the media were invited to inspect new trains under construction for use across the Île-de-France region. 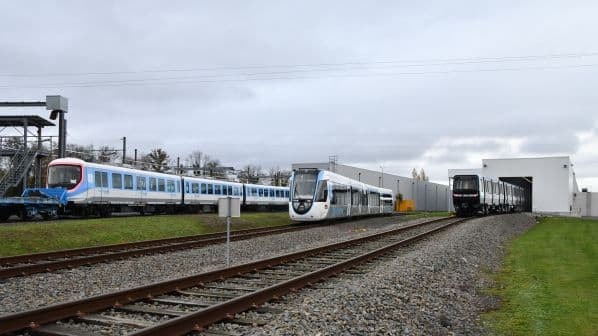 MS Valérie Pécresse, president of the Île-de-France region, and other local elected representatives, took their first ride on a new RER NG double-deck EMU built by Alstom in Valenciennes on November 22.

The trains are designed for high-density loading, with over half of the seats folding up to provide extra standing capacity at peak times. The outer vehicles of the EMUs, which have two power bogies, are single-deck, with accommodation for wheelchair users. The four or five intermediate cars are double-deck; on the upper deck, seating is in a 3+2 configuration and on the lower deck there are three seats on one side of the aisle, with fold-up seats on the other.

RER NG sets for Line E will replace Z 22500 double-deck units built from 1996 and additional sets will allow trains to operate to Nanterre when Line E is extended from Haussmann to Saint Lazare in 2024. The new fleets will also operate on the line from Saint Lazare to Mantes-la-Jolie which will be added to Line E at a later date.

To accommodate very short headways in the peaks over the central section of Line E (and later Line D) a new cab signalling system known as NExTEO is under development for the RER NG sets. Unfortunately, introduction has been delayed by around two years, but Alstom now says that the RER NG trains will be able to operate on lines D and E without NExTEO until the new system is required and deliveries are now underway.

Manufacturing of the new trains is divided between the two Alstom sites on either side of Valenciennes: Crespin to the north (formerly Bombardier) produces the intermediate vehicles while Petite-Fôret to the west produces the end cars and assembles the whole train.

Alstom also presented the final Francilien (also known as NAT) single-deck articulated EMU to the press on November 22. No less than 360 of these trains have been delivered to Île-de-France since 2009 and, after a difficult start, they have become the most reliable trains in the Paris region, operating out of Paris Gare du Nord, Gare de l’Est and Saint Lazare.

The Francilien production line will now give way to a new line for the MI 20, the next generation of double-deck stock for Paris. These trains will replace MI 78 and MI 84 single-deck EMUs, which were designed for RER Line B which connected French National Railways’ (SNCF) lines to the north of Paris with Paris transport operator RATP routes to the south.

A consortium of Alstom and CAF will build 146 MI 20 trains. The original contract was won by Bombardier and CAF but was hotly contested by Alstom, with an appeals process delaying the start of production. In the end Alstom acquired Bombardier and will now work with CAF.

The MI 20 trains will be quite different to the RER NG, notably having shorter coaches; a seven-car unit is 104m long compared with 130m for a seven-car RER NG.

Alstom also presented a Régio 2N 10-section articulated double-deck EMU, the 133rd train to be produced from an order for 145 sets which operate out of Paris Lyon and Montparnasse.

The Petite Fôret plant is Alstom’s Centre of Excellence for the production of the Citadis Dualis four-section tram-train. Two batches are currently being built for the greater Paris transport authority Île-de-France Mobility: 11 for Line T4 where they will replace Siemens Avanto sets built from 2005; and 23 for Line T12 from Massy to Evry, which is due to open in 2023.

Also on display were several rubber-tyred MP14 sets for Paris metro Line 11. These have driver’s cabs, unlike the longer automatic version for Line 14. A total of 39 five-car units are on order for Line 11, while 20 six-car driverless MP14 sets are in service with RATP on Line 4 and 35 eight-car sets are being delivered for Line 14. Up to 37 more sets may be ordered for Line 14 which is currently being extended at both ends of the route.

In addition, Alstom is building steel-wheeled metro trains for lines 15, 16, 17 and 18 of the orbital Grand Paris Express network, now under construction. Crespin also is preparing to produce the first of 44 steel-wheeled MF19 metro trains for RATP of which 14 will be four-car sets for lines 3, 3b and 7b. Five-car sets will go to Line 10 in Paris.

Alstom estimates that 80% of the work at its two Valenciennes plants, which together employ 4000 people, is carried out for Île de France, although this varies slightly depending on how many Régio 2N sets are being built for other French regions. Petite Forêt is currently also producing type M7 double-deck power cars for Belgian National Railways (SNCB) as well as driverless metro sets for Lille and Marseille.