Russia’s invasion of Ukraine exposes the risks to the supply of a critical component in all rail vehicles: wheels. 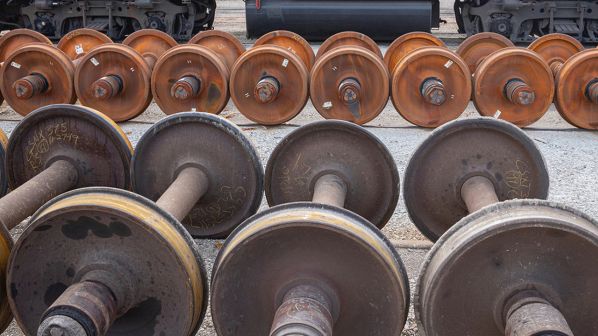 There are more than 1.2 million wheels consumed annually in North America.

NOTHING highlights the impact and risks of the global supply chain on the North American rail industry better than wheels. Yes, wheels for rail rolling stock: freight cars, passenger and transit cars, and locomotives.

There are more than 1.2 million wheels consumed annually in North America with a market value exceeding $1 billion in a normal market of 40,000 new car builds, plus replacements. During the past two decades, there has been a trend toward the global sourcing of wheels for the North American rail market. Yet, nothing is more critical to rail operations than wheels.

Recent developments with the Russian invasion of Ukraine are frightening. China, with its support for Russia’s aggression, combined with its grand strategy of dominating global rail supply, also raises the question of its true intentions of eliminating the North American supply base. In June 2021, I wrote an article outlining China’s grand ambition to dominate global rail supply, including freight and transit railcars, and their components. Surprisingly, the article proved to be one of Railway Age’s most widely read articles in 2021. We struck a nerve.

Exacerbating the geopolitical risks associated with global sourcing, logistics expenses and logistics impediments such as shipping delays and “port jams” are all part of the calculus. Ships are unable to transport goods in and out of Russia due to a lack of insurance, while containers from China get logjammed at U.S. ports. Will there ever be “normalcy”? And if or when “normalcy” returns, are we going to go running back to China and Russia for wheels?

There are 22 AAR-certified wheel plants globally. Of these, 5 are in China, 2 in Russia, 1 in Ukraine, 2 in Brazil, 1 in Canada, 1 in Japan, 1 in France, 1 in Spain, 1 Italy, 1 in the Czech Republic, 1 in Australia, and 5 in the United States. Let’s focus on the two largest importers of wheels into North America: Russia and China.

Russian wheel plants: The two Russian AAR-certified wheel suppliers are Evraz and Vyksa. Evraz is a huge $13 billion steel company with a global presence and revenues of $2.36 billion in North America. Of this total, North American rail component revenues were $392 million in 2021. Most of this revenue comes from the supply of rail, with a small percentage from wheels. Evraz North America, an independent, wholly owned U.S. subsidiary of London, U.K.-based Evraz PL, that employs 1,200 (900 of whom are United Steelworkers), enjoys a 48% market share of steel rail in North America, with a plant in Pueblo, Colo. It should be noted that Evraz does not produce wheels in North America, but includes sales of imported wheels from Russia in its North American revenues. The company says that only a small percentage of its North American revenues comes from its Russian-manufactured wheels. All rail manufacturing takes place in Colorado.

Evraz evolved as a result of the dissolution of the Soviet Union on Dec. 26, 1991, with Roman Abramovich, widely identified as a ”Russian oligarch,” controlling 29% of the company today. He is currently not on a sanctions list, but seems to be very close. Given Evraz’s reliance on the Russian economy, and on Russian banks for financing, it begs the question of its ability to maintain global operations and supply. For the sake of its North American operations and for their many employees, let’s hope Evraz is able to navigate these trying times. But what if it’s not? What is going to happen to the company’s $392 million of rail products in North America?

Interestingly, Evraz’s 2021 $392 million revenues in the North American rail market grew from $326 million in 2020, but this revenue increase came on lower sales volume. From its 2021 annual report: “Railroad product revenues increased 20.2% driven by growth in sale prices of 25.4%. This was partially offset by decrease in sales volumes of 5.2%.”

Vyksa describes itself as Russia’s “largest domestic manufacturer of steel pipes and railway wheels.” Vyksa produces more than 850,000 rail wheels annually, mostly for the Russian market. However, it has made made strong inroads into North American rail supply through the import of wheels from its Russian plants, but its ability to support this going forward is likely at extreme risk. If you’re currently purchasing, and depending upon, Vyksa wheels, is it worth the additional risk to your operations?

Chinese wheel plants: Of the 5 Chinese AAR-certified wheel plants, 2 are joint ventures with Amsted Rail to supply wheels exclusively to the Chinese market. The joint ventures were established more than 30 years ago to introduce modern wheel technology to China. Since then, 3 other Chinese wheel plants have been constructed: Taiyuan Heavy Industries (2 plants) and Maanshan Steel, both SOEs (state-owned enterprises). The Taiyuan Heavy Machinery Group Co. was founded in 1950 as the first state-owned heavy machinery company, designed and constructed by the government since the founding of the People’s Republic of China in 1949.

Maanshan (aka Masteel) is yet another Chinese SOE. From its website: “The Company is one of the largest iron and steel producers and marketers in the People’s Republic of China, and is principally engaged in the manufacture and sale of iron and steel products. The manufacturing process primarily involves iron-making, steel-making and steel rolling projects. The Company’s principal product is steel products, which come in four major categories: steel plates, section steel, wire rods and train wheels.”

As I articulated in my June 2021 article, China has set forth a strategy to dominate the global rail supply market, both freight and transit. Using CRRC (China Railway Rolling Stock Company), another SOE, as a catalyst, China has exploited the ambitions of its “One Belt/One Road” and “Made in China 2025” strategies to its advantage. China rail product manufacturers receive preferential treatment through this strategy and are rewarded for their global growth achievements.

Both companies have served the North American rail market for more than 100 years. Between Amsted Rail and Sumitomo Standard Steel, there is more than sufficient capacity to satisfy a 60,000-plus annual car build market, which translates to 480,000 new wheels.

The bottom line: Is it worth the risk to rely on imported wheels to support your ongoing rail operations? Given geopolitical events, we should be doing everything possible to bolster our North American supply base to ensure the viability of the North American rail industry, especially during these times of geopolitical conflict.

Principal of Rail Supply Chain Associates, Robert H. Cantwell spent more than 40 years in executive positions in the rail supply industry. He spent the first 26 years of his rail industry career growing a successful company, Hadady Corp., a designer and manufacturer of truck (bogie) components and systems for locomotives and transit railcars. Following the sale of his business, Bob helped transform Amsted Rail, holding various executive positions for 16 years. He has been active in the Rail Transportation Division of the ASME (American Society of Mechanical Engineers) and is past Chairman of the Division. Bob holds degrees in Mechanical Engineering from the Georgia Institute of Technology and an MBA from the University of Chicago. He possesses a unique perspective on the rail supply industry, combining his engineering experience along with robust economic and financial acumen. As an active investor in the rail industry, he has a vested interest in the success of the industry. He has also actively advocated with members of Congress in support of the rail and rail supply industry. The opinions expressed here are his own.