The climate change agenda and explosion in e-commerce is offering British companies the opportunity to repurpose redundant electric trains. Richard Clinnick reports on the latest project. 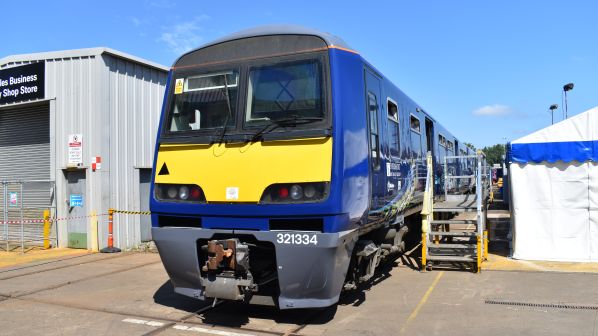 WHEN shopping online, how many people now click on the ‘next day delivery’ option? Clearly enough for it to be an option, and clearly enough for Eversholt Rail to convert an EMU into a freight train to meet such needs.

The British rolling stock leasing company is keen to exploit the opportunities created by the growth in e-commerce combined with the increased focus on climate change and decarbonisation.

Currently in Britain the only freight multiple units are 15 class 325s owned by Royal Mail and operated by DB Cargo UK. Several passenger operators carry express freight on their services, but these loads are relatively small.

There was once an expansive network of parcels trains running across the country, including travelling post office services where Royal Mail staff sorted people’s post as the train travelled overnight. By 2004 this had been lost, the railway reportedly pricing itself out of a market in which it was competing with road and air. The rolling stock assets, which were coming up to being life-expired anyway, were withdrawn, while many of the hubs built in the mid-1990s for the Railnet concept were demolished after barely a decade’s use.

Britain’s passenger railway has since become much busier. Freight is often marginalised when it comes to pathing due to its slower operations caused by much heavier payloads, slower acceleration, and the need to use diesel traction because of unelectrified terminals.

On July 1, Eversholt unveiled a modified four-car former passenger class 321 EMU at Wabtec’s Doncaster Works. Branded the Swift Express Freight train, this is the prototype of what could be a fleet of at least 20 EMUs.

While Eversholt owns the trains, Ricardo carried out the mass management work, design engineering and third-party scrutiny of the refurbishment work. Wabtec, which has a history with both Eversholt and class 321s, carried out the modification.

Due to go on lease to an unnamed freight operator for trials, the EMU has had its seats removed, new flooring fitted, and industry standard fixings installed throughout. For the time being this set retains its passenger door controls, passenger information systems and toilets (locked out of use), but these will likely be removed in the future. Four first class seats have been installed so that a customer can have staff on board the train when it’s travelling if they choose to do so.

Eversholt client services director, Mr Paul Sutherland, wouldn’t confirm which companies were leasing the trains at the launch, but did admit that all the major British freight operating companies were interested in examining the concept.

It makes sense for them to be as well. Sutherland says that during 2019 there was an awareness from British freight operators of a growing demand for lighter parcels as well as a faster delivery of items - essentially the growing trend for next day delivery.

At the same time, the class 321 fleet was due to come off-lease as new trains were introduced by their operators. Of the 117 originally built, 29 have been scrapped and 13 converted to class 320s for use in Scotland. This leaves 75 for various projects. 30 of this 75 have been fitted with ac traction packages and modern interiors but are due to go off-lease from Greater Anglia eventually. The Swift EMUs will not receive the traction modifications these trains did; around 20 class 321s are planned for use in the hydrogen Breeze project with Alstom that involved converting EMUs to use this alternative power, although this is not likely to happen in the immediate future.

Although sending class 321s off-lease has been delayed, that is not affecting the Swift programme. “What was really interesting was Covid has given it a tremendous shove in the direction of being a really viable product,” Sutherland says. “Despite the high street reopening it hasn't really seen any sort of softening of that at all, so it’s very obvious that this is a service that’s increasingly in demand.”.

It also offers the railway an opportunity to encourage modal shift from road to rail, and by using class 321s in eight or 12-car formations to transport goods on electrified lines, there is the opportunity to meet the government’s zero carbon plans.

Each Swift class 321 will be formed of two driving vehicles capable of transporting 9450kg of goods in a 43m² area, a trailer coach also capable of carrying 9450kg albeit in a 42m² area (this is where the toilets are), and a motor vehicle with a payload of 10,200kg in a 45m2 space. Goods can be loaded on cage trolleys, pallets or other load types. These can all vary depending on the customer.

Who will use Swift?

Sutherland says that the aim of the Swift concept is to provide a link in the logistics chain between distribution hubs and city centres. “What we've seen in the last couple of years is a real appetite to do things in a greener way,” he says. “And whilst the operators have an aspiration, the freight operator’s customers are also interested in being greener as well.

“The whole idea is you can get straight into town and city centres with one of these. The really interesting debate is the ability to get into town centres quicker than road, because you haven’t got the congestion they have, so we really think it's a big opportunity. A lot has happened even in the last a year and a half that we've been working on this in terms of who's approached us and asked, ‘can we do X, Y and Z?’.

“And the answer is, you know, it’s a blank canvas in terms of what to do with the interior to make it suit your operation.”

Furthermore, the freight market is one that has always been cost sensitive according to Sutherland who explains that the cost pressures on road transport are making customers rethink their strategies. Driver shortages, ultra-low emission zones and congestion charging are all issues that will not leave the road sector soon he suggests.

However, the problem remains around the last-mile situation, with Sutherland suggesting that the class 321s could be locomotive hauled into terminals. Although this far from ideal, not only because of the environmental impact but also operationally due to the need to couple, uncouple and in some instances also run round the train.

Sutherland confirms that a battery-powered version of the train is due to be unveiled in 2023. However, this will have a range of around 11km using battery power – meaning the immediate future is very much electric for Swift Express Freight.

The class 321s were built in 1988–1990 and designed as commuter trains, which  Sutherland says was an ideal platform to build on “because it’s well understood, it’s well known, and it’s got an awful lot of commonality with other platforms in Britain.  “There's a lot of British Rail-era legacy stuff on there that’s the same as other fleets, so it’s well supported,” he says. “It’s not a particularly complicated asset.

The class 321s are currently based at Ilford, near London. However, with that depot in use to maintain new-build trains, a new home for the 321s is needed.

Eversholt and Wabtec are currently investigating what a suitable heavy maintenance regime will look like for the Swift trains because the duties they could be used on are vastly different to what they have done previously. Sustained long-distance 160km/h operation covering around 400,000km per year is one possibility as is covering a mere 80,000km per year.

Sutherland confirms that more trains will be completed before the end of the year. “We’re mobilising to modify some more units which will be available in the fourth quarter of 2021,” he says.

“The battery self-powered mode is a parallel piece of work we're doing and we're looking to have a first in class operating in 2023.”

Eversholt left the freight sector in 2012, selling all but its class 66 diesel locomotives. So why return to the market now? Was it because of a perception in the passenger market slowing down? Sutherland refuses to get drawn on that side of the discussion, but says the company feels it is a really smart repurposing of a passenger unit.

“I think without too much investment and upheaval, we can actually offer something that really meets the freight market needs...and that’s without commenting on their sorts of business strategy or market forces,” he says. “We’ve got a massive demand for light parcel traffic, it’s green, and it ticks all the boxes.”