Rio de Janeiro has announced plans to build three new light rail lines at a cost of around $US 3bn to create a 145.5km network, making it one of the largest systems in the Americas, reports Renata Passos. 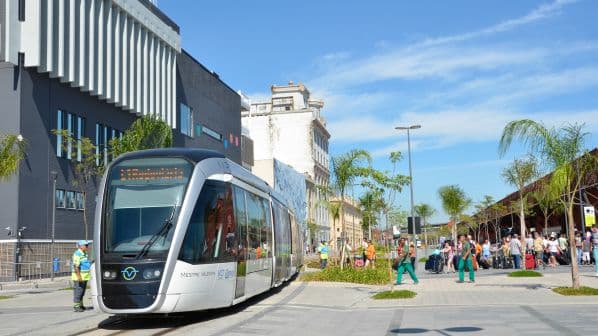 THE success of VLT Carioca, Rio de Janeiro’s first light rail network, which has an approval rating of more than 88% of the population, is motivating the development of a project to provide the city with a 145.5km light rail network by building one new line and converting two large Bus Rapid Transit (BRT) lines, which transported about 339,000 passengers a day in 2019, to light rail operation.

The city’s current 28km light rail network, the first section of which was inaugurated in time for the 2016 Olympic Games, has three lines with 29 stops, and is served by a fleet of 32 Alstom LRVs each with capacity for 420 passengers. The line does not have overhead catenary as it is mainly equipped with Alstom’s ground power system (APS) while the LRVs are fitted with batteries to bridge gaps in the APS network.

According to Mr Luiz Eduardo da Silva, engineering director of Rio de Janeiro’s Partnership and Investment Company (CCPar), the project involves constructing three lines at an estimated cost of Reais 16bn ($US 3bn), including the acquisition of around 180 LRVs (possibly with overhead catenary) with a capacity greater than the vehicles used on VLT Carioca.

The Reais 1.3bn Botafogo - Gávea light rail line will be implemented as a public-private partnership (PPP) and work is expected to begin on the project next year. The line will run from Botafogo, on metro lines 1 and 2, southwest around the north side of Lake Rodrigo de Freitas to Gávea where it would interchange with a planned extension of metro Line 4.

“The proposal is to update a 2015 study of the line and passenger demand, because after the pandemic there is a different scenario, with an increase in the circulation of cars,” da Silva says. “We need a more realistic projection.”

“The big difference with light rail projects is that we look at the city as a whole, we not only redevelop transport, but also urban spaces, thereby improving the city.”

Initially, the 12km line will have 13 stops, along with an integrated operation and maintenance centre. Between 15 and 18 LRVs, similar to those used on VLT Carioca, are planned. Construction should start in 2023 with operation beginning in 2025.

The second new line involves the conversion of the TransCarioca BRT line, connecting Barra da Tijuca with Galeão International Airport, at an estimated cost of Reais 6bn. The line is currently 39km long and has 44 high platform stations but is expected to be 43km long when the work is completed.

The third project is the conversion of the 58km TransOeste BRT line, which has 60 stations and runs from Jardim Oceânico in Barra da Tijuca northwest to Santa Cruz, with a branch from near the western end of the line northeast to Campo Grande, largely paralleling a SuperVia commuter rail line. Conversion of the TransOeste line into a 62.5km light rail line would require an investment of Reais 8.7bn.

Funding is being sought from Brazil’s National Bank for Economic and Social Development (BNDES) for studies to identify traffic flows, including the areas where demand will be greatest.

One of the reasons for converting the two BRT lines to light rail is that between 2017 and 2020 they suffered from serious problems: 56 stations were closed, 316 articulated buses were withdrawn from service, and there were interruptions to services on sections of the TransOeste line.

Da Silva says there are cost advantages from converting the existing BRT lines rather than building new light rail lines from scratch. The BRT network already features dedicated BRT lanes and high-platform stations. However, he says “we will need to plan well” to minimise disruption to BRT services during the works.

Da Silva expects the studies to be contracted in the first half of next year with the bidding process and the start of work expected to take place in the second half of 2023.

In the meantime, the city will continue to improve the existing BRT corridors while planning for conversion to LRT is underway. “We won’t stop any of the plans already announced for the BRT,” says da Silva. “We’re not going to stop buying buses and doing the renovations. Everything that is planned for the BRT will be fulfilled in my time in office.”

This includes the delivery of major projects such as the completion of the TransBrasil BRT line and the Gentileza interchange; the resurfacing of the TransOeste BRT corridor; and the expansion of the city’s bicycle path network.

“The Gentileza terminal will be the first intermodal terminal in Rio de Janeiro and will integrate the TransBrasil BRT on the eastern side of the city, two light rail lines and 22 urban bus lines,” da Silva says. The new terminal is expected to handle 120,000 passengers per day.

“The big difference with light rail projects is that we look at the city as a whole,” he says. “We not only redevelop transport, but also urban spaces, thereby improving the city.”