The European rail sector is grappling with spiralling energy costs, which are exacerbated by uncertainty following the Russian invasion of Ukraine. IRJ’s editorial team rounds up the recent response and developments from across the industry. 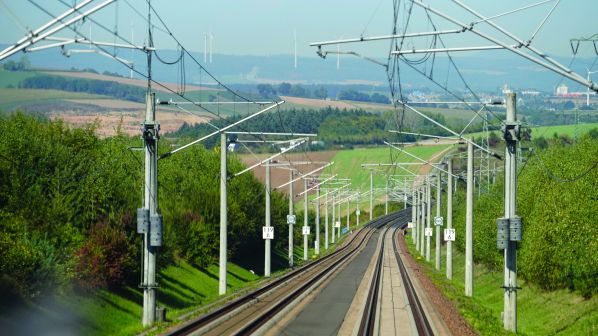 The cost of energy in Europe and around the world has skyrocketed over the past year. Photo: DB/ Volker Emersleben

THE soaring cost of energy in Europe is adding fuel to the inflationary fire created by the Covid-19 pandemic, hampering Europe’s recovery and creating a political headache for governments across the continent.

According to the European Union Institute for Security Studies (EUISS), the energy crisis that engulfed Europe in 2021 was triggered by a confluence of external and internal factors, leading to a surge in energy prices and market turmoil. This included an unusually cold winter in Europe and Asia in 2020-21, straining gas supplies, while suboptimal wind conditions hampered wind generation within the EU. Caixa Bank found that gas, oil and coal prices increased by 290%, 50% and 47% respectively in the second half of 2021 compared with 2020.

The situation has been compounded by the Russian invasion of Ukraine. Russia supplies 10-25% of the world’s oil, coal, and gas. Turning off the Russian tap has caused the price of oil and gas to rise sharply and induced the Biden administration to seek alternative supplies from Saudi Arabia and even Venezuela as it tries to mitigate the impact.

Europe is particularly vulnerable. The rising cost of energy has thwarted efforts to ward off the effects of rising inflation on the European economy. The global supply chain’s continuing struggle to recover from Covid-related shutdowns and issues with labour shortages and logistic logjams mean that manufacturers and suppliers have been unable to cope with strong demand for consumer and industrial products, causing prices to increase.

For the rail sector, higher energy prices are resulting in increases in the cost of purchasing electricity for infrastructure managers without fixed term contracts. The cost of diesel has also surged around the world. In Germany, the average retail price increased to €2.10 per litre in mid-April, which was up from €1.66 a litre at the end of February. Traders have predicted a diesel shortage in Europe as Russian sanctions bite.

The rising cost of steel production, an extremely energy-intensive process, is also set to impact the rail sector. Dutch infrastructure manager ProRail says European rolling mills have closed because of the rising gas price, preventing the delivery of three trainloads of around 60km of rail to the Netherlands in March and April. It says sleeper production is also under pressure because of steel content while it is suffering from similar shortages of timber to support station construction projects.

According to analysis by SCI Verkehr, wagon manufacturers are increasing the cost of their products by 30%, which will hit operators significantly, and is a cost SCI Verkehr says is not enforceable in the market, although a 15% increase is now realistic.

Inevitably this is a sensitive topic for the supply sector. IRJ approached a variety of industry manufacturers and bodies to discuss the issue but only received a limited response. Alstom, for example, said that about two-thirds of its order book is covered by clauses adjusting selling prices according to changes in raw material and labour indices, which has allowed it to avoid impacts on its margins.

“Rail transport has shown how useful it is to everyone and to all regions: the energy crisis should not be allowed to wipe out all recent efforts.”

“However, the matter of inflation and supply chain disruption is clearly something we are monitoring closely, with teams mobilised to mitigate eventual effects,” Alstom said in a statement. Unife said it would not comment on the issue at the current time.

The situation is though already beginning to bite for some, leading to changes to activities and charges to make ends meet. Others are requesting government support: freight operators in Spain have called for government assistance to mitigate the effects of high energy prices while the French Rail Freight of the Future Alliance, which represents the major rail freight players in France, claims that unlike the road haulage industry, its members are being excluded from state aid to help them through the energy crisis. The alliance said that with the price per kWh set to increase by 70%, the energy crises could cost the rail freight sector in France €55m this year.

“It is inconceivable that rail freight should not benefit from comparable measures,” says Alliance coordinator, Mr Franck Tuffereau. “Rail transport has shown how useful it is to everyone and to all regions: the energy crisis should not be allowed to wipe out all recent efforts.”

Belgian freight operator Lineas is the first operator to begin to pass the price increases onto customers after it applied a dynamic energy surcharge to all its transport from April 1. The company claims that while this is common practice for other modes of transport, it is the first rail company to implement the measure. It is unlikely to be the last.

Lineas says that at EEX, Europe’s leading energy market, the spot price per megawatt hour has more than tripled compared with average prices in 2021 and the economic hardship has reached a level it can no longer absorb.

The surcharge will be adapted monthly based on changes in energy prices and considering possible energy consumption by national authorities. The current spot price is €300 per megawatt hour. It will also differ between domestic and international transport to account for variations in how energy is charged to railway operators in different markets, ranging from 3.5% in the Netherlands to 8.1% in Germany.

“We cannot continue to be the only mode of transport that doesn’t pass on the rising energy costs,” says Lineas chief commercial officer, Mr Lars Redeligx. “This is surely true for privately owned businesses like us, but even for state-owned competitors, the solution cannot be that the taxpayer has to cover their rising bill.”

However, not all operators have yet been exposed to the crisis. Netherlands Railways (NS) told IRJ that the high energy prices have a limited influence on its operations as it works with long-term energy contracts with largely fixed rates. Instead, the operator has seen the energy crises as an opportunity to attract passengers away from private cars, with NS highlighting the savings that could be achieved with its group tickets and other offers, compared with travelling by road.

“We have the impression that the high fuel prices do result in extra passengers on our trains,” an NS spokesperson told IRJ. “However, it is difficult to determine the exact effect. More and more coronavirus measures are disappearing in the Netherlands, which also results in more passengers on the train.”

As the Ukraine war drags into its third month, operators and infrastructure managers across Europe are beginning to calculate the long-term effects.

German Rail (DB) and Italian State Railways (FS) both issued caution over the possible impact of the war in Ukraine and future forecasts. ProRail also said at the end of March that it could no longer rule out the possibility that rail projects will be “hit hard” by the war and that it will also be more difficult to tender for new projects.

This prediction came true when ProRail announced it had stopped tenders for the electrification of the 107km Nijmegen - Venlo - Roermond line, known as the Maaslijn, which was due to be completed by the end of 2024. Prorail says the budget was set to be exceeded due to the increasing price of copper, steel and other materials, problems in delivery and effects of the war in Ukraine, all of which would have meant the project would have suffered delays.

“We are faced with an increasing uncertainty as to whether materials can be delivered on time and at what price.”

Consultations are currently underway with the Dutch Ministry of Infrastructure and Water Management, and other public clients, contractors and suppliers, about the measures to allow work and tenders to continue as much as possible. ProRail is also compiling an inventory of which projects are affected by the Russian invasion of Ukraine.

“We are faced with an increasing uncertainty as to whether materials can be delivered on time and at what price,” says Mr John Voppen, ProRail CEO. “That affects our tenders and the work.”

As well as exporters of raw materials, Ukraine and Russia are significant suppliers of rails and wheels. While Alstom say its “supply chain exposure to Ukraine and Russia is relatively negligible,” SCI says 25% of the wheels used for European wagon fleets are supplied from the Ukraine. It says that this will prevent the on-time delivery of wagons and drive-up costs.

Other wheelset producers like CAF, Lucchini or GHH Bonatrans are likely to try to increase their production. However, they face issues with getting the necessary materials. They are also likely to be more expensive, according to SCI.

SCI Verkehr adds that Ukraine is responsible for 6% of steel imports into the EU and Russia 15%. With capacity available elsewhere, SCI says other enterprises are ready to fill the void albeit at a higher cost. Indeed, this is likely to be the theme of the adjustments set to take place over the weeks and months ahead as the crisis plays out.

AFTER transporting more than three million passengers out of Ukraine since the Russian invasion began on February 24, Ukrainian Railways (UZ) chairman, Mr Alexander Kamyshin, told a briefing at the end of March that the evacuation flow was decreasing to five times lower than on peak days.

Kamyshin said at the time that more than 7000 tonnes of humanitarian aid had been carried by passenger trains in Ukraine and more than 1400 wagons with aid had operated during the first month.

He says that the main focus of UZ’s work is to support the war-torn country’s economy including operating evacuation trains and establishing new logistics routes. UZ has begun working with the country’s postal service Ukrposhta to restructure logistics chains to increase reliance on the railway both during the Russian invasion and after the war.

The first postal train carrying goods operated on April 1. UZ says that with roads more dangerous, and journeys taking a lot longer due to checkpoints, the logistics chains needed to be restructured and that the railway is clearly the most reliable and predictable solution currently available.

The war has impacted other international routes, with the Allegro passenger service between Helsinki and St Petersburg suspended indefinitely from March 28.

The trains had continued operating after Russia’s invasion of Ukraine to allow Finns access to their home country, as well as providing a means for people wanting to leave Russia.

Meanwhile, support for Ukraine across the world has continued, with rail industry officials in Europe and the United States forming the multi-national Support Ukraine Rail Task Force to coordinate technical, mechanical and policy support for Ukrainian rail freight and passenger companies.

The task force says there need to be more trains collecting refugees from the Ukrainian border and the other hubs including Warsaw, Prague, Vienna and Frankfurt (Oder). An early objective will be to provide a forum for governmental organisations and passenger and rail freight associations to discuss the Russian invasion of Ukraine and the most effective ways to support the Ukrainian rail sector.

The first of six DB Cargo rail landbridge trains carrying humanitarian aid to Ukraine arrived on March 24. DB Cargo is working with DB Cargo Poland, PKP LHS and UZ to create the landbridge, with the first train departing Germany on March 11 from Seddin marshalling yard southwest of Berlin, operating via Kraków and destined for Kyiv. The train consisted of 15 containers carrying 350 tonnes of aid.