With the Mumbai - Ahmedabad project suffering from delays of around five years, the focus for India’s high-speed programme is moving towards gaining approval for other lines, as Srinand Jha explains. 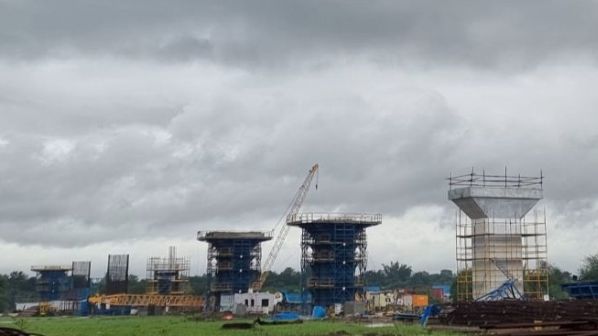 Construction of the Mumbai - Ahmedabad line is underway but clouds are gathering over India's high-speed ambitions.
Photo Credit: NHSRCL

THE Indian government is beginning to shift priorities for India’s high-speed rail programme towards securing approval for new projects following official confirmation from the country’s railways minister, Mr Ashwini Vaishnaw, that completion of the inaugural Mumbai - Ahmedabad high-speed line will be delayed by around five years.

Speaking to reporters in Ahmedabad on September 30, Vaishnaw said a trial run on the 50km Surat - Bardoli section will take place no earlier than March 2026, contradicting a statement made by the government in August that the project would meet the completion target of December 2023.

The Japan International Cooperation Association (JICA)-funded project - India’s biggest infrastructure project at Rs 1.1 trillion ($US 14.7bn) - has stagnated in recent years for multiple reasons including revised cost estimates and political differences between the central and Maharashtra governments over the acquisition of the land required for the project. Of the 432.67 hectares required in the state, only 134.63 hectares (31.12%) has been acquired by September 30. While the official project costs have not been revised, it is now expected to reach Rs 1.8 trillion with efforts underway to reduce the figure to Rs 1.6 trillion.

“We are working on ways to make up for the time loss caused by the coronavirus pandemic,” says NHSRCL chairman and managing director, Mr Satish Agnihotri.

Given the unlikelihood that substantial progress will be made on the Mumbai - Ahmedabad line before India’s next general election in 2024, the National High Speed Rail Corporation (NHSRCL) has apparently changed tact and is instead focusing on finalising Detailed Project Reports (DPRs) and obtaining from the union cabinet for the six other planned high-speed lines.

“The DPR on the Delhi - Varanasi line is in its final stages and is likely to be submitted to the government in November,” says NHSRCL spokesperson, Mr Sushma Gaur. The DPR for the greenfield Delhi - Ayodhya - Howrah line is also a priority, official sources said.

While half of the civil works tenders worth Rs 280bn for the Mumbai - Ahmedabad line have been awarded and finalised, there is the possibility that these contracts could be revised. There is also speculation that Tata Consultants could leave its role as project management consultants, with Aecom potentially under consideration to replace them. These changes would also increase project costs.

Sources indicate that the Indian and Japanese governments remain divided over the revised project costs, which have also been affected by the conversion rate between the Yen and the Rupee, as well as the higher cost of importing machines and material and design changes proposed by the India government. Jica officials could not be reached for comment.

“The pandemic situation has necessitated changes in scope and execution plans,” an official says. “In some areas the costs will rise, but in others, the expenses could decrease as Indian companies could get the opportunity to execute works that were originally planned to be done by the Japanese firms. Actual project costs can be calculated only when the remaining tenders are opened.”