William C Vantuono, editor-in-chief of IRJ’s sister publication Railway Age, considers the current challenges facing the US rail freight sector, of which there are many. 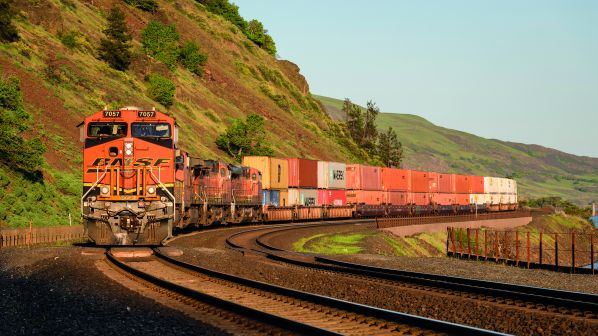 BNSF and the other big four Class 1 railways will be required to report performance metrics by the Surface Transportation Board. Photo: Shutterstock

COMPARED with the intense scrutiny US Class 1 freight railroads have been subjected to by the United States Surface Transportation Board (STB), as well as other industry stakeholders, dealing with the global Covid-19 pandemic was a relatively calm stroll in the park on a warm spring day.

So far, 2022 has been a perfect storm for the industry. Rolled into a giant clump of overcooked spaghetti suspended in a spider’s web coated with super glue are - count them:

1. Continuing supply chain problems over which the railways have a limited amount of control.

3. A labour shortage that some say is the industry’s fault, due to poor planning for a post-Covid recovery.

4. Possible STB regulatory action on provisions like reciprocal switching, which the railways say is akin to having a sleeper spike driven into one’s skull with a spike maul.

5. Intense criticism of Precision Scheduled Railroading (PSR), which detractors say has resulted in nothing more than excessively long, unsafe trains and too few crews to operate them.

6. Similar criticism on the part of the STB and its activist chairman, Mr Marty Oberman, of Wall Street-friendly practices like stock buybacks and cuts in capital investment programmes.

7. A Federal Railroad Administration (FRA) that, at least on the surface, appears to be beholden to politicians and the labour unions who contribute big bucks to their campaign coffers, unduly influencing the agency to apply the brakes on waivers to test beneficial, artificial-intelligence-based technology like Automated Track Inspection (ATI). Hearings on rail safety and service conducted by the Democrat-controlled, union-favourable US House Transportation & Infrastructure Committee, Subcommittee on Railroads appear to be in lock-step with the FRA rollbacks (and an attempt to mandate two-person crews). Many observers see them as little more than political theatre.

8. Combat-like national labour negotiations with unions that refuse to budge a centimetre from demands on compensation, benefits and work rules. A nationwide rail labour strike - which hasn’t occurred in 30 years - is looming.

9. A significant STB ramp-up of the performance metrics that railways are required to report, coupled with a new demand for service recovery plans. These beefed-up regulations apply mainly to the “Big 4” Class 1s - BNSF, CSX, Norfolk Southern and Union Pacific, and last, but not least,

10. freight traffic that, for most categories, is flat or declining.

A closer look at the STB regulations governing performance metrics and service recovery plans - and Oberman’s excoriation of railroad responses - gives, in a broader context, a solid snapshot of this perfect storm.

On April 26 and 27, the STB held a public hearing, “Urgent Issues in Freight Rail Service,” on what it’s calling the “recent significant performance deterioration of the freight rail industry.”

At the hearing, the agency heard compelling testimony from shipper and labour witnesses about the severity and dire impacts of substandard rail performance, in addition to insights presented by US secretary of transportation, Mr Pete Buttigieg, and US deputy secretary of agriculture, Ms Jewel H Bronaugh. The STB also heard testimony from BNSF, CSX, Norfolk Southern (NS), and Union Pacific (UP) about the causes, extent and likely duration of service disruptions, and their remedial initiatives.

Many observers say the hearing was an opportunity for shipper and labour interests to turn up the heat on the railways and fan the blame game fire with hurricane-force hot air.

The hearing triggered a rapid response from the STB. On May 6, the energised agency issued an order, “Urgent Issues in Freight Rail Service-Railroad Reporting,” requiring the Big 4 to file service recovery plans addressing the “severe service deficits presently permeating their rail networks.” The plans “would specifically describe their key remedial initiatives and promote a clearer vantage point into operating conditions on the rail network.” But for Oberman, these plans were “woefully inadequate.”

“Unfortunately, these four carriers submitted plans that were perfunctory and lacked the level of detail that was mandated by the board’s order,” Oberman says.

“The plans generally omitted important information needed to assure the board and rail industry stakeholders that the largest railways are addressing their deficiencies and have a clear and measurable trajectory for doing so. Of particular concern was the fact that UP and NS flatly refused to provide the six-month targets for achieving their performance goals explicitly required by the board’s order. Because of the plans’ shortcomings, the board finds it necessary to require the railroads to supplement their plans and provides explicit further instruction on the critical information they must include.”

So, on June 13, the STB issued yet another order directing the Big 4 to correct what it says are “deficiencies in their rail service recovery plans” filed in response to the May 6 order. STB also ordered these railways “to provide additional information on their actions to improve service and communications with their customers as well as additional detailed information to demonstrate their monthly progress in increasing the size of their work forces to levels needed to provide a reliable rail service.

“We are in the middle of a rail service crisis, and the board continues to receive reports about persistent, acute and dramatic problems in rail transportation.”

The STB says the service recovery plans, together with the additional requested information, “are crucial components of the board’s active monitoring of the nation’s freight rail industry” and particularly the board’s focused efforts to ensure that the large carriers overcome the significant service problems affecting many rail users and the public.

“Freight rail is critical to our nation’s economy, and we must ensure the railroads are doing everything within their means to transport commodities that are crucial to the public welfare, such as animal feed, food ingredients, fuel products and fertilizers, and critical chemicals,” Oberman says.

“We are in the middle of a rail service crisis, and the board continues to receive reports about persistent, acute and dramatic problems in rail transportation, disrupting critical supply chains and shutting down companies. The freight rail industry is currently struggling to provide adequate rail service, yet the service recovery plans we received are woefully deficient and do not comport with the spirit or the letter of the board’s order. The plans simply failed to instil confidence that the carriers have a serious approach to fixing a problem caused by their own lack of preparedness to respond to external shocks and fluctuations in demand, including especially short-sighted management of labour forces and other resources.

“While the railroads must always comply with board orders, it is particularly disturbing that they failed to comply with the order requiring them to file adequate service recovery plans,” Oberman continued. “Under circumstances where service is not meeting customers’ needs, this is not too much to ask from highly sophisticated companies with important public responsibilities. I had expected a better response from the carriers to the board’s previous order, and now with more explicit instructions, which should not have been needed, there will be no excuse for continued lack of compliance. UP’s May 20 response to the board’s May 6 order was by far the worst of all the carriers and reflected an attitude of indifference to the documented effects of its service deficiencies on its customers and of disregard for the board’s statutory oversight of the freight rail industry.”

Oberman’s strongly worded condemnation is unlike anything that has ever been seen from the STB, which for the longest time had been viewed as an agency “under the radar,” buried in paperwork, crunching numbers produced by a small army of attorneys and clerks, largely out of the public’s eye.

The agency’s newfound activism - driven in part, some observers say, by the administration of US President, Mr Joe Biden - has increased almost exponentially. There is also a major decision looming: saying yes or no to the merger of Canadian Pacific and Kansas City Southern to create Canadian Pacific Kansas City (CPKC), North America’s first transnational railway, covering Canada, the US and Mexico.

Though up to this point things have gone smoothly for the two Class 1’s - approval of a voting trust, and the end-to-end, zero-overlap transaction occurring under the STB’s pre-2001 rules - the merger is not a regulatory slam dunk. True, the chances are heavily in favour of the deal’s approval in early 2023, but to borrow a famous malaprop from legendary New York Yankees player and manager, Yogi Berra, “It ain’t over ’till it’s over.”