Rail re-openings in England have been rare in recent times, but as Richard Clinnick discovers, a new method which looks to halve costs and encourage creative thinking could be set to change the situation. 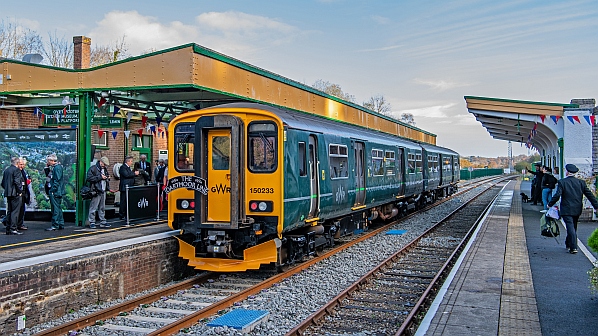 RECENT years have been littered with rail projects in Britain that have been either considerably delayed or overbudget, and in some cases, both.

The Great Western Electrification Programme (GWEP) was planned to cost £800m but ended up closer to £3bn despite it being truncated. Electrification schemes in north west England were delayed to such an extent that planned timetable improvements in 2018 were severely affected causing political uproar.

However, as daily passenger trains returned to the Devon town of Okehampton on November 20 2021 after almost 50 years, there is renewed optimism that new ways of working implemented on that project could be replicated across the country.

As part of the refurbishment, infrastructure manager Network Rail (NR) laid 17km of new track, installed 24,000 concrete sleepers and 29,000 tonnes of ballast. Repairs were completed on 21 structures including four bridges. Level crossing improvements have been undertaken, while GSM-R has been installed and drainage works conducted.

This resulted in the railway being formally reopened several months earlier than planned, with the eventual £40m cost some £10m cheaper than envisaged. Less than a month after it opened, GWR said more than 10,000 passengers had travelled on the line.

The project is the first to benefit from Rail Project Speed (Swift, Pragmatic and Efficient Enhancement Delivery), which seeks to analyse the prospective costs of rail schemes with the objective of improving affordability. Project Speed was launched in February 2021 by a British government seeking to challenge the rail industry to pioneer new ways of working that could halve the time and reduce the cost of delivering critical infrastructure schemes.

Project Speed also works alongside the Restoring Your Railway Fund (RYR), which was launched in January 2020 with a budget of £500m that could be used to reverse closures recommended in the infamous Beeching Report published in 1963. Ironically, Okehampton’s closure was not actually recommended in that publication.

Funding is split in three ways to offer support to projects at different phases of development. The first is the Ideas Fund, which supports proposals to reinstate axed services. These should be sponsored by local MPs collaborating with local authorities and community groups. The next stage is Advanced Proposals. As well as looking for new ideas, the £500m will also be used to help accelerate the development of closed lines and stations which are already being considered for restoration. The final stage is the Proposals for new and restored stations. This is a new round of the New Stations Fund and supports both the development of new stations and the restoration of old station sites.

“Improving transport links are essential to levelling up and spreading opportunity across the country, which is why we are driving forward our pledge to reverse the Beeching cuts,” said British prime minister, Mr Boris Johnson, ahead of the line’s official reopening.

NR Wales & Western region capital delivery director, Mr Stuart Calvert, told IRJ that the first serious meeting regarding the reopening was held in February 2020, days before Project Speed was launched. Even then it was felt creativity was required to get the project approved.

Calvert admits the project was facing problems at that point, but says there was a solid base with the line already in situ. “When we set out, we didn’t have a gold-plated design, the plan was just a service,” he says adding that without Project Speed, the line would not have opened when it did, or for the price achieved. “Rail is too often driven by compliance, and yet you can be compliance driven and not over-engineer.”

Operationally Calvert says NR could be creative with the works needed to reopen the line. “To get the standard needed for an hourly service we re-laid the track to a certain profile,” he says. “The track is for heavy rail, but we asked what was the minimum viable scope for it to operate to safe standards?” But with the railway set to be used by just an hourly DMU service and no inter-city or heavy freight traffic, there was no need to follow the usual standards for a new line during the work, which helped to reduce costs without affecting safety.

Initially the service operates every two hours and when it first opened the line speeds varied between 64km/h and 88km/h. The eventual plan is a maximum 120km/h on the existing infrastructure.

“The main thing is about opening up minds to thinking differently,” Calvert says. “We could see people thinking this is easy. We want to open lines and this is a good start.

“I’m delivering £1bn of work across each Control Period [the five-year NR spending periods] and the only thing people want to hear is when it goes wrong,” Calvert continues. “I want to change the philosophy. We want to apply Speed to other projects - it is our way of working now. There is long-term buy-in and now the supply chain thinks differently and asks questions. This is exciting.”

GWR head of strategic service development, Mr Matthew Barnes, spoke to IRJ on the launch day, November 17, at Okehampton. He says it was only the last two years that the “stars aligned” to enable work to progress on the project.

The heritage company that had been operating on the line entered administration in 2020. This removed a barrier and enabled NR to quickly mobilise a base at Okehampton station. Barnes says the business case for the project was submitted in autumn 2020 and the funding announcement followed in February 2021 by which point all the required resources in terms of staff and equipment were in place.

Barnes says creating the diagrams and timetable was an art. Initially services are timed to operate at up to 88km/h, which is key to achieving the hourly service. “That allowed us to move paths and thread services through Exeter St Davids,” he says. “The hourly service was always the plan and serving Exeter Central helps as we can take people to jobs and the centre of the city.”

Barnes says that when the railway opened 50 drivers had already been trained for the route with another 100 due to undergo training. They will be supported by 100 guards. “There was a pretty unique collaboration for this,” he said. “Driver training began before GSM-R was installed, using previous operating methods. That allowed us to test the line for Network Rail, including the GSM-R. That’s a big part of the ability to reopen as quickly as we did.”

Barnes is not resting on his laurels. Shortly before the Okehampton railway reopened, DfT announced £50,000 of RYR funding for the 9km Bere Alston - Tavistock line. This closed in 1968 but is the focus of a campaign to open the entire Bere Alston - Okehampton route.

Unlike the Okehampton line, the railway is not in place for this route, and there are obstacles in the way of the original track bed including local authority buildings. Nevertheless, the will is there. Barnes says this is a fantastic opportunity to keep the Okehampton team together.

“It is shorter, but different, and if we can make that happen then who knows about the rest of the line,” he says.

Speaking exclusively to IRJ on November 16, the then rail minister, Mr Chris Heaton-Harris, said that the RYR had attracted extraordinary levels of attention from local authorities and communities. He said this was “gratifying” as he had been quoted in the past as saying he was prepared to say “no” to projects if costs were too high. He told IRJ that the DfT wants the principles used on Project Speed to be applied to bigger projects although he didn’t specify which.

Turning his attention to RYR, Heaton-Harris says the DfT wants examples of best practice that can be accelerated so other railways can follow Okehampton’s lead. NR and operators have bought into this approach, he claimed. “If you deliver these projects in a quicker time you are going to cut down in disruption and open more markets, and this particular project really does demonstrate what can be done,” Heaton-Harris said. “Yes, it is a smaller project, but the lessons can be multiplied up. We can, I think, ask for more effective decisions.” He adds that there are “bits of government bureaucracy and governance” that get in the way and work is ongoing to permanently remove that.

There is also the possibility that not all RYR schemes will be heavy-rail solutions. The former minister suggests that what may be approved on some schemes is what is deemed to be the appropriate measure based on factors such as cost. “There’s lots of opportunities to think slightly differently,” he says. “In some parts of the country they have looked at costs, and maybe thought about very light rail.” The Vivarail Pop-Up metro is one idea he suggests where a low-cost train is used to prove the commercial viability of a line before significant investment is made.

Okehampton is the first in what could be a new way of doing things on Britain’s railway. Not just for re-opening lines, but the way in which major projects are planned and costs managed. It may be small, but the Dartmoor Line could be revolutionary.