Wabtec battery-powered locomotives could be used on three continents 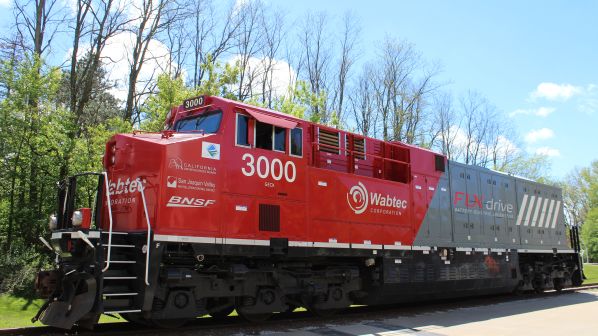 WABTEC battery-powered locomotives could be used on three continents after trials with the manufacturer’s FLXdrive 1.0 were successful.

Hamilton confirmed that these talks include mining customers in South America and Australia. Lines operated by mining customers make a lot of sense, he explained, because the ore is being mind high up and is then hauled down to a port. “The other thing with mining customers is often it is a captive and very predictable type of operation, so it is something that has great, great potential,” Hamilton says.

The tests in California between January and March involved coupling Wabtec’s FLXdrive 1.0 between two diesel locomotives during operation.

Getting the project to full production will take a couple of years after testing of FLXdrive 2.0, which is being built at Wabtec’s Erie plant in Pennsylvania, begins in the second half of 2023. This locomotive will be the next stage in the development of the battery-powered locomotive concept from Wabtec.

“The current FLXdrive 1.0 that we demonstrated is very modest in terms of the size of the battery,” Hamilton says. “It is 2.4MWh. That is a lot of energy compared with a car, but when you think about the amount of energy that these trains use that is a very modest amount. Our FLXdrive 2.0 that we are working on is more than 6MWh, so you can imagine what that will do potentially for fuel savings on certain routes - maybe almost a 30% fuel saving, and again the geography is very important.

“I think that we have the potential with customers, both in North America and around the world to think about how we develop this technology in a safe and responsible manner. As it reaches maturity and costs continue to come down, there’ll be more and more opportunities for that technology to be deployed.”

The July 2021 edition of IRJ will include a detailed feature on Wabtec’s work on the FLXdrive battery locomotive project in California.