Marty Haycraft will be succeeded by John Newman. 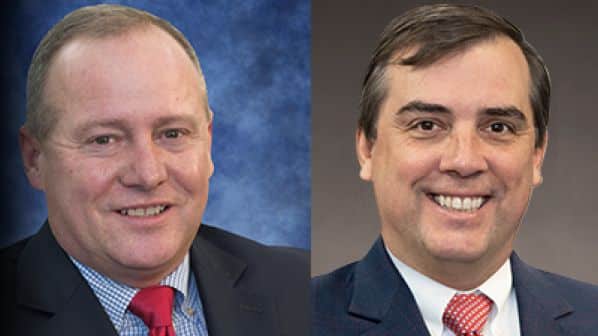 Current and soon to retire Progress Rail president and CEO, Mr Marty Haycraft, left, and his successor Mr John Newman, right, who will be stepping into those roles at the end of the year.
Photo Credit: Railway Age

PROGRESS Rail has announced that its president and CEO, Mr Marty Haycraft, is to retire after 32 years of service at the end of this year.

Haycraft began his professional career in 1990 with Wheel Corporation of America, where he worked as a production employee and gained experience of wagon wheelset. He joined Progress Rail in 1993.

“With such an accomplished career, Marty has much to be proud of and celebrate,” says Caterpillar Energy and Transportation Group president, Mr Joe Creed. “This includes the tremendous strides he and his team have made in support of our locomotive emissions reduction technologies and new offerings to help customers achieve their climate-related objectives.”

Named as successor to Haycraft at both Caterpillar and Progress Rail is Mr John Newman, who joined Caterpillar in 2011 as an attorney with the Legal Services Division.

After joining the Caterpillar commercial team in 2012, Newman served as regional director of sub-Saharan Africa, based in Pretoria, South Africa, and as the company’s strategic sales director. In 2015, he was promoted to senior vice president of corporate services, with responsibility for strategic growth including mergers and acquisitions.

“Rail is a rapidly evolving industry, and John’s experience and expertise will serve him well as he leads the team into the future,” Creed says.