French manufacturer continues to expand its expertise in the hydrogen rail sector. 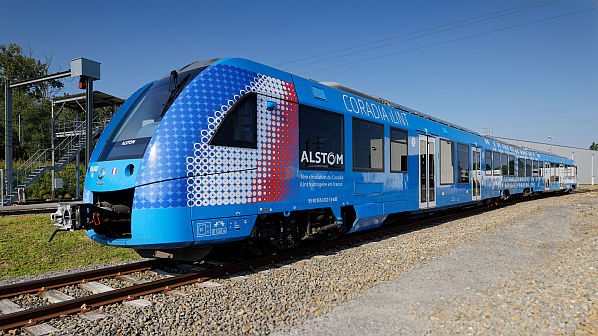 The Coradia hydrogen iLint that ran under its own power in northern France.
Photo Credit: Alstom.

ALSTOM has signed a collaboration agreement with Liebherr Aerospace & Transportation, France, aimed at optimising hydrogen systems including improving the reliability and durability of fuel cells, increasing their power density and reducing the cost of such technology.

The agreement does not, however, establish a partnership or joint venture between the companies. While they intend to cooperate as per the agreement, both companies acknowledge that nothing in the agreement shall oblige either company to enter into further agreements.

“Our ambition is to accelerate the adoption of hydrogen in the rail industry and to develop innovative solutions in the context of the greening of heavy mobility, including regional trains, shunting locomotives and freight locomotives,” says Mr Jean-Baptiste Eyméoud, president of Alstom France. “To develop a hydrogen ecosystem, particularly in France, we need to mobilise the public authorities and all the players in this sector,” he said.

Alstom signed a partnership agreement with Hynamics, a subsidiary of the EDF Group, earlier in November to define an international refuelling standard that will help limit the immobilisation of hydrogen trains during refuelling. Alstom also acquired Helion Hydrogen Power, which specialised in high-powered fuel cells and was based in Aix-en-Provence, in April.

An in-depth feature asking if hydrogen is the answer for the rail industry was published in the October edition of IRJ, and digital subscribers can read it here.