The results are the first for the period since the acquisition of Bombardier Transportation. 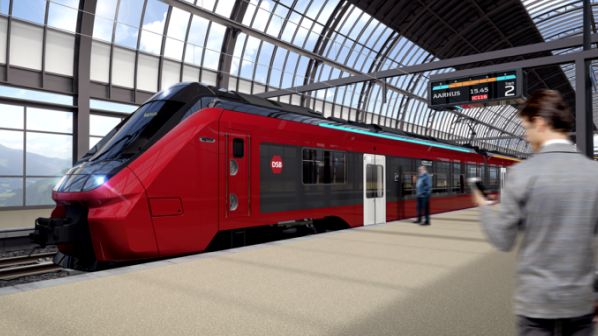 Contract wins during the period include orders for Coradia EMUs in Denmark and X’trapolis trains for the 1452km Mayan Train project.

ALSTOM recorded €9.7bn in new orders and €7.4bn in sales in first half of the 2021-22 financial year between April 1 and September 30, the first complete half-year period following the acquisition of Bombardier Transportation on January 29. This compares with combined orders of €5.3bn and sales of €6.5bn for the manufacturers prior to the merger in the same period the previous year.

Alstom’s order backlog was €76.36bn as of September 30 following the acquisition of Bombardier, compared with €40bn on September 30 2020.

“Our first semester results are in line with our expectations as announced at the capital markets day in July,” says Alstom chairman and CEO, Mr Henri Poupart-Lafarge. “During the first semester, the group had a very strong commercial performance across all regions and product lines, illustrated by significant wins in Mexico, Taiwan, and Europe. Those successes leveraged the market momentum acceleration and the reinforced group’s profile which combines qualified teams, diverse product portfolios and improved customer intimacy around the world. Our operational performance is also consistent with our plan, with the integration of Bombardier Transportation fully on track and the progress with project stabilisation. The group is now firmly engaged on the continuous improvement of its financial trajectory.”

Alstom’s order intake was fuelled by strong demand in Europe, totalling €6.3bn of orders, notably with large orders such as the €1.4bn agreement in Denmark for 100 Coradia Stream EMUs and 15 years’ maintenance. Alstom also signed several contracts in Germany, including a signalling order in Stuttgart with the Coburg rail node and an order for suburban trains in Hamburg totalling €500m.

Alstom also booked €3.4bn of orders outside Europe. In the Asia Pacific region, Alstom registered more than €1bn in orders, including 25 new generation X’trapolis suburban trains for €300m and the phase two of Taipei’s fully automated Circular Line for €400m. North and South America accounted for €2.3bn of orders, including the Mayan Train project for €1bn, and 60 new Flexity streetcars for the city of Toronto for €300m.

Alstom says sales in the services division, which totalled €1.56bn, illustrated the positive impact of traffic returning as pandemic restrictions eased. Rolling stock sales were €4.285bn, sustained by the progressive ramp-up of production. Alstom reported €1bn in sales in signalling while systems delivered €522m of sales over the period with growth resuming thanks to the ramp-up of projects in Canada, Egypt and Thailand.

Sales related to non-performing backlog, representing sales on projects under cost-to-cost method with a negative margin at completion, amounted to €1.29bn over the period. Alstom confirms that the execution of such non-performing projects should last two to three years.

Spending on research and development was €220m. The Coradia iLint hydrogen fuel cell passenger train made its first runs in Poland, Sweden and France, and Alstom also signed a memorandum of understanding (MoU) with Plastic Omnium to design onboard hydrogen storage solutions.

Alstom also reached important milestones in September with its high capacity and energy-efficient electrical rail solutions by presenting the Avelia Horizon power car which offers 20% more capacity and a 20% reduction in energy consumption compared with the previous generation.

Alstom has also been awarded an integrated turnkey metro system using the train-to-train signalling technology for line 18 of the Ile-de-France network. Alstom and Airbus Cybersecurity also signed a worldwide cooperation agreement in September to provide cybersecurity solutions and services to operators.

Alstom recorded €47m in restructuring and rationalisation costs including the closure of Aptis activities and a €32m cost of integrating Bombardier Transportation.

Adjusted net profit reached €172m compared with €168m the previous year, impacted by the volume effect, the integration costs and other one-off items below adjusted EBIT.

During the period the group free cash flow was negative at €1.46bn. As anticipated, cash flow was impacted by non-recurring working capital build-up due to project stabilisation efforts, phasing effect and industrial ramp-up.

Alstom says its new organisational structure was fully deployed during the period. The company expects to generate €400m in cost synergies from the acquisition of Bombardier on an annual basis by the fourth or fifth year.

Alstom has already merged around 40% of its processes, focusing on the commercial and tender processes and tools, as well as on the deployment of strong engineering and quality governance principles. Alstom expects to reach 80% by the end of the 2021-22 financial year. All rolling stock sites are already using the new inventory management methodology.

Alstom has finalised the digital factory roadmap and has already begun deploying it in some Bombardier Transportation legacy sites, leveraging the maturity of the solutions and its past deployment experience.

The products convergence is also on track with the product and component portfolios of both companies reviewed extensively. Alstom has already prepared its new integrated research and development plan which is now being deployed across the organisation to intensify and focus innovation efforts.

For the second half of the 2021-22 financial year, Alstom is expecting:

Between 2020-21 and 2024-25, Alstom is aiming to grow sales at a compound annual growth rate of more than 5%, supported by strong market momentum, securing around €30bn in sales over the next three years. Rolling stock should grow above market rate, services at solid mid-single digit path and signalling at high single digit path.