AS Americans head to the polls to vote for either President Barack Obama or his Republican challenger Mr Mitt Romney in today's presidential election, voters will also be asked in 12 states whether they approve resolutions and tax increases that could provide up to $US 100bn in direct funding for 19 transit projects. 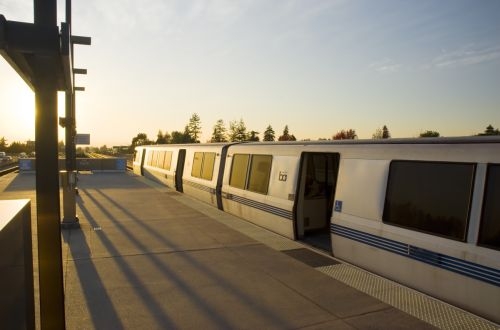 People across the United States are voting on resolutions that will provide funding for future public transport projects. In Alameda County, California, voters will decide whether to extend the region's 30-year transport sales tax which will support future Bart projects.

The Centre for Transportation Excellence estimates that $US 3.4bn will be available for vital transport projects during the first year of implementation if the measures are passed, and points to the strong record of voter approval for such measures ahead of the election.

Highlights from a rail perspective include Measure J in Los Angeles County where voters are being asked to extend the current half cent sales tax that was approved in 2008 for an additional 30 years. If the measure passes the area will be able to complete seven transit projects, including a metro to UCLA, an airport link, and a downtown connection service far more quickly than originally planned. A mail-in ballot has also asked residents whether they would be willing to pay a dedicated tax to fund a light rail line that will connect the region's subway and light rail networks as well as the largest destinations in downtown LA. A similar ballot is also taking place in Kansas City, which is planning to build a $US 100m downtown light rail line.

Elsewhere in California, a 30-year extension of the existing transport sales tax contribution is proposed in Alameda County, which incorporates the cities of Oakland and Berkeley. Of the $US 7.7bn expected to be collected over the period, 24% will go towards transit operation and maintenance, as well as capital projects such as the Dumbarton project, new Bart stations and around $US 400m towards the Bart Livermore extension.

The Mayoral race in Honolulu, Hawaii, could indicate the future of that city's metro system. Despite construction on a $US 5bn elevated metro line being well underway, Democratic candidate Mr Ben Cayetano opposes the project which is supported by his opponent, and previous acting mayor, another Democrat, Mr Kirk Caldwell. Cayetano has threatened to shut down construction if he is elected and favours building bus rapid transit instead.

In Houston voters are being asked whether they would like to continue to divert a 1% transit sales tax away from bus and light rail expansion projects to local road improvements. The current diversion was due to expire in 2014, but voters can extend this until 2025.

Residents of Clark County, which encompasses Vancouver, Washington, will decide whether they support a 0.1% sales tax increase which will provide funding for light rail and bus operations, while in Arlington County, a Virginia suburb of Washington DC, voters are similarly being asked whether they approve a $US 32m bond that will be spent on transit, road, bike and pedestrian projects. If approved, a great portion of this money will be allocated on fleet and capital improvements to the region's Metrorail network.

Across the state, Virginia Beach residents are being asked whether they approve of an extension of the successful light rail line from neighbouring Norfolk into their city with the city council due to make the final decision.

Voters in Orange County, North Carolina, will also decide whether to follow a neighbour after Durham County residents approved a half-cent sales tax dedicated to transit funding last year. If approved, the two counties plan to improve bus services and construct new light rail and commuter rail lines. Specifically, about $US 418m of the $US 661m that will be collected over the next 30 years will go towards a building a light rail line from the University of North Carolina in Chapel Hill to downtown Durham.