IN a report released on Monday, China's auditing authorities claim that Yuan 491m ($US 78m) was embezzled from the Beijing - Shanghai high-speed project. The audit of the line, which began operations last June, was conducted between June and September 2011 and found several irregular practices in the construction and management of the project. 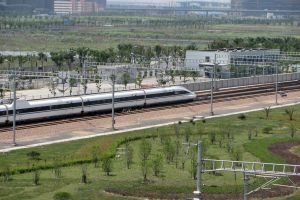 The report says that some local units along the railway link extracted, intercepted, or misappropriated Yuan 491m allocated for demolition and relocation. In addition the report found irregular practices in construction and management of the project. Up to Yuan 849m of purchases were not made through the standard bidding processes, while the cancellation of wind barrier construction projects. In some sections meant that Yuan 413m in funds were not properly used.
The report states that at the end of May last year Yuan 8.25bn was owed to companies involved in construction of the railway, including Yuan 5.87bn to material suppliers and Yuan 2.37bn to construction labourers. China budgeted Yuan 217.6bn for the project, although the final cost is not known. According to the auditing authority, investments made up to the opening of the line in June 2011 totalled Yuan 196.27bn.
Categories: Asia, Financial, News
Tags: 1 Highspeed, China