The tender includes two lots for routes in the east of the German state. 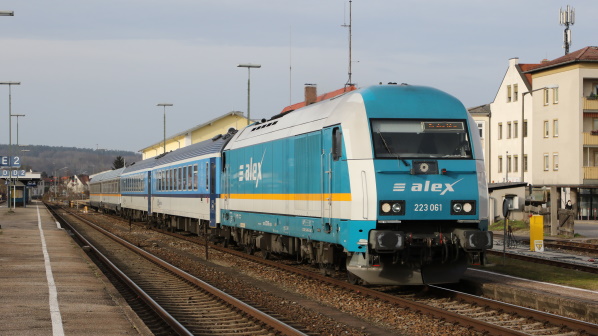 BAVARIAN state rail authority Bavarian Railway Company (BEG) has issued a tender for a contract to operate express services in eastern Bavaria from 2023.

The tender closes on August 20 with a result due in October. The contracts will begin on December 10 2023 and run for three years to December 2026, with two one-year options which together would extend the contract to December 2028.

The services, which connect Munich with Hof and Prague, are currently operated by Netinera subsidiary Die Länderbahn (DLB) in conjunction with Czech Railways (ČD).

The services currently split into portions at Schwandorf, but are being tendered as two separate lots, raising the possibility that two different operators may win the contracts:

BEG says splitting operation of the two routes will improve reliability and enable more and longer trains to run between Munich and Schwandorf. On the Munich - Regensburg section, the new services will replace an existing DB Regio service every other hour.

Operation in the Czech Republic will continue to be procured by the Czech Transport Ministry in partnership with BEG’s new operator.

Under the contract, the operator will assume revenue risk, in common with other recent tenders from BEG.

The use of older rolling stock and locomotives is permitted, although new trains can also be offered.

BEG views the contract as a ‘bridge’ to a future long-term contract that will introduce new trains to the route. Electrification of the Hof - Regensburg section is planned by the late 2020s.