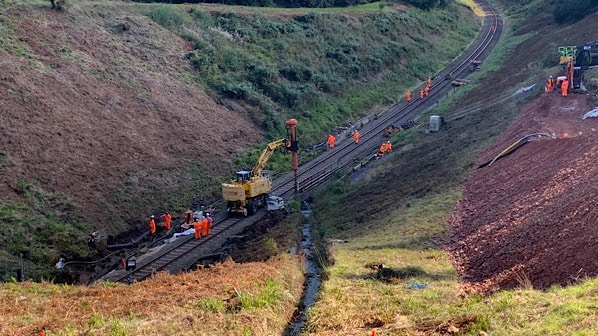 THE British government says infrastructure manager Network Rail (NR) will spend around £44bn on operation, maintenance and renewal of the national railway network for the five-year period from 2024 until 2029.

The Department for Transport confirmed details of the Statement of Funds Available (SoFA) and the High-Level Output Statement (HLOS) for the five-year period, known as Control Period 7 (CP7), on December 1.

Secretary of state for transport, Mr Mark Harper, told parliament that the HLOS specification makes it clear that “the government will press ahead with rail reform, addressing the challenges facing the sector, such as fragmentation and outdated working practices.”

“The government now expects Network Rail to develop detailed plans to deliver on these objectives, working closely with its customers,” Harper said. “These will then be subject to strong and effective scrutiny by the Office of Rail and Road, as independent regulator, to develop robust, credible, value for money plans for the next control period.”

Of the £44.063bn anticipated in the SoFA, £27.529bn will be supported by network grants provided directly by the government to NR with the remainder covered by NR’s own income. Ultimately the ORR will determine the final level of income required by NR through its Periodic Review. Funding for network enhancements is excluded from the SoFA.

The HLOS sets out the government’s high-level objectives for the railway network. The DfT says underpinning this is recognition of the plans developed and delivered for CP6 alongside “a challenging efficiency programme” and the Covid-19 pandemic.

It adds that “the railways are a key part of the government’s plan for economic growth and while strongly supporting the railway’s recovery recognises that there remains an urgent need for continued modernisation and significant efficiency improvements to bear down on the cost of the railway, thus increasing value for money for the taxpayer, whilst delivering for passengers and freight customers.”

The Railway Industry Association (RIA) welcomed the announcement. While it says a direct comparison of the level of spending with CP6 cannot be made because of what is included, the association believes the new funding settlement appears to offer a small increase in expenditure.

RIA chief executive, Mr Darren Caplan, says rail suppliers will inevitably play a significant role in working with Network Rail to ensure the programme of work is delivered in the five years from April 2024.

“With passenger numbers reaching as high as 99% of pre-Covid levels, as they did on Friday November 18, it is clear the national railway will need this investment to meet both current and future demand,” Caplan says.

“Nevertheless, at a time of significant inflation it is unlikely the funding settlement will cover all the investment needed. This makes it all the more essential to recognise the role the supply sector can play. We therefore welcome the commitment in the HLOS for NR to work collaboratively with the supply chain, a consistent ask of RIA and our members in recent years.”

Consistent with recent communications, RIA also called for certainty and visibility in the work pipeline, stating that it helps rail businesses plan for the people, skills and equipment they need to deliver and get best value for taxpayers.

Caplan says suppliers now await NR’s regional business plans, and ORR’s work, to establish which work will go ahead, in which parts of the country.

“It will be particularly important to collaborate to avoid ‘boom and bust’ between and within control periods,” Caplan says. “RIA will work with its members, the government and NR, to understand the implications of this funding settlement and work together on delivering the CP7 workload as efficiently and effectively as possible.”