The 503km line will run from Ankara to Izmir. 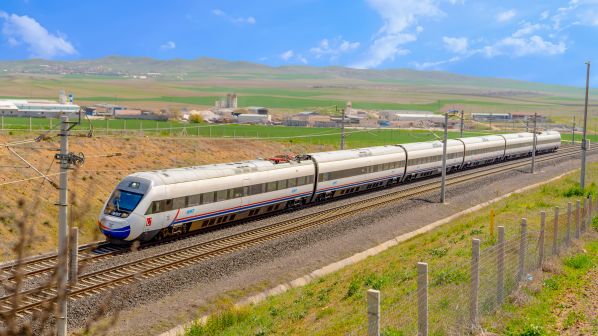 The line will run from Polatli, south of the junction where the Ankara - Istanbul and Ankara - Konya high-speed lines divide.
Photo Credit: Shutterstock

THE British government announced it will guarantee a €2.1bn loan to finance the 503km Ankara - Izmir electrified high-speed line in Turkey.

The financing is led by Credit Suisse and Standard Chartered Bank and will be guaranteed by UK Export Finance (UKEF) through its Buyer Credit Scheme. The financing meets internationally recognised sustainability standards and is aligned with the Green Loan Principles. Reinsurance is also being provided by international export credit agencies such as SACE in Italy, SERV in Switzerland and OeKB in Austria, reducing the risk to the British taxpayer.

The 250km/h line will run from the capital to the port city via Afyonkarahisar, Kütahya, Uşak, and Manisa. The funding is the first UK-supported rail transaction in Turkey for more than 160 years.

Construction of the line is divided into four sections:

Construction of the 151.2km Polatli - Afyonkarahisar section started in 2013 but was suspended in 2018. The ERG JV of three sister companies, ERG International, ERG Insaat Ticaret ve Sanayi (ERG Construction) and Sauerwein & Schaefer Bau (SSB), was awarded a contract to finish the incomplete infrastructure works of Section 1 which includes superstructure, electrification and signalling.

The financing deal will secure major contracts for British companies to supply the project, with several deals worth hundreds of millions of pounds reportedly close to being agreed. British companies are expected to supply track, turnouts, point machines, fasteners, material and equipment for signalling, telecommunication and electrification systems, as well as insurance and freight services.

The bilateral trading relationship between Turkey and Britain was worth £17.5bn between the fourth quarter of 2020 and the third quarter of 2021.

“Turkey is a vital trading partner for the UK,” says British international trade secretary, Ms Anne-Marie Trevelyan. “Our shared global outlook on free trade and the environment is the driving force behind economic growth in our two nations. It is fitting that UK Export Finance’s biggest ever civil infrastructure deal is strongly sustainable. This is a proud moment for the UK railway industry, using its industrial roots to reduce emissions in heavily polluted cities.”

“Referring to the Bilateral Cooperation Agreement signed between the UK and Turkey in 1999; we have successfully achieved the closing of the landmark financing of the Ankara - İzmir High Speed Railway Project under the green loan structure,” says Turkish treasury and finance minister, Dr Nureddin Nebati. “We have given utmost importance to the environmental and social procedures during this project and as the Ministry of Treasury and Finance we are closely following the improvements of such issues. We also desire to be among the active and important players of the rapidly growing green finance market.”

The announcement was welcomed by Britain’s Railway Industry Association (RIA), which was approached by ERG International UK in October to provide support to better understand Britain’s industrial capability to provide superstructures, electrification and signalling. RIA says it connected ERG with senior people at its member and industry companies, which they identified as meeting their initial requirements.