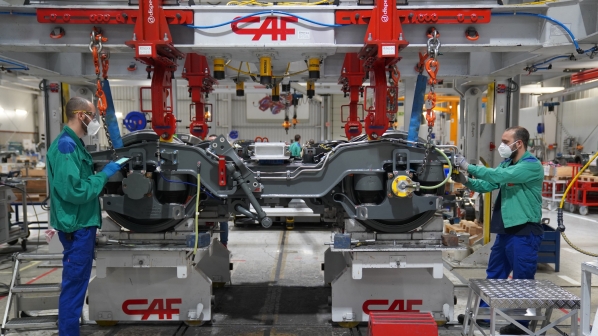 CAF says the shutdown of manufacturing at its main factories, the fall in services provided to operators, and the reduction in deliveries of buses compared with the first half of last year were the main factors behind the fall in revenue. Revenue excluding the Solaris bus division, which was purchased in July 2019, amounted to €889m, down 11% from 2019.

The main projects underway during the half included the manufacturing of Civity units for Netherlands Railways (NS), Civity DMUs for West Midlands Trains in Britain, regional trains for New South Wales, Australia, and metro units for Barcelona. Staff costs increased by 10%, largely due to the acquisition of Swedish maintenance specialist EuroMaint, which was purchased in 2018.

The decline in adjusted Ebitda was mainly attributed to the reduction in activity in the first six months of the year due to Covid-19.

Despite the complexity of the current situation, CAF says it is aiming to recover and continue its growth in revenue and profit of the last few years based on what it regards as favourable market trends:

The positive outlook for CAF is supported by a high order backlog at group level, along with the development of new areas of activity deriving from existing efficiency initiatives.

CAF expects to return to normal levels of Ebitda in the second half of 2020, depending on the Covid-19 situation in countries where CAF operators.

At the beginning of the pandemic, following the declaration of a state of emergency in Spain and other countries, CAF introduced a number of exceptional containment measures to control the virus. These included:

The gradual re-opening began in late April and May, with: