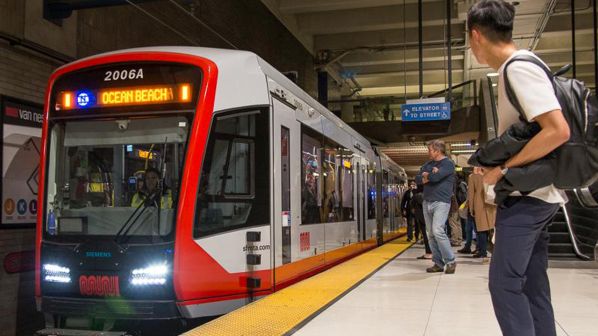 Funding is being provided to upgrade signalling on the Muni network in San Francisco.
Photo Credit: Muni

THE California State Transportation Agency (CalSTA) has announced the latest cycle of grant awards under its Transit and Intercity Rail Capital Programme (TIRCP), which will see $US 378.9m provided for rail-related capital investment out of a total allocation of $US 796.1m.

“All projects are located within disadvantaged communities or low-income communities, and contribute direct, meaningful, and assured benefits,” says CalSTA.

This is also the first TIRCP award cycle where projects have been selected to meet the objectives of the Climate Action Plan for Transportation Infrastructure, which California has adopted “to aggressively combat and adapt to climate change while supporting public health, safety and equity,” says CalSTA.

The Capitol Corridor Joint Power Authority (CCJPA) has been awarded $US 49.9m towards the $US 95.1m to be spent on priority projects under the Sacramento Valley Station Transit Centre programme, intended to improve connections between commuter rail, light rail, and buses at Sacramento Valley station. This includes a loop to serve a new platform for light rail services and a double-track alignment from the platform to the intersection of F Street and 6th Street.

Light rail operator Sacramento Regional Transit District (SacRT) has been awarded $US 23.6m towards the $US 47.2m cost of purchasing eight new low-floor LRVs to increase system capacity. “These funds put us one step closer to replacing our ageing light rail fleet with entirely new and modern, low-floor vehicles that will improve accessibility for all riders,” says SacRT Chair, Mr Steve Miller.

San Francisco Municipal Transportation Authority (SFMTA) has been awarded $US 116.1m for its Core Capacity Programme, costing a total of $US 378.3m. The programme includes improving reliability, efficiency, journey times and passenger comfort on the K, N and 38R Geary lines of the Muni light rail network.

The CalSTA funding will also go towards two phases of the Train Control Upgrade Project, including upgrades from Embarcadero and 3rd Street to Muni Metro East. This project is being executed in seven phases running until 2031 to replace automatic train control (ATC) in the Market Street Subway with communications-based train control (CBTC), increasing capacity by 20%.

The San Joaquin Regional Rail Commission (SJRRC) and San Joaquin Joint Powers Authority (SJJPA) have been awarded $US 57m towards the $US 163.7m cost of extending Altamont Corridor Express (ACE) commuter services from Ceres to Turlock. A further extension to Merced to provide interchange with future high-speed services is also planned.

CalSTA has provided $US 24.8m towards the total $US 53.8m cost of Sonoma Regional Bus and Rail Connectivity Improvements project, being taken forward by Sonoma County Transportation Authority (SCTA) with partners including Sonoma-Marin Area Rail Transit (Smart). The project includes the construction of a Smart commuter rail station at Petaluma North, which will be the thirteenth station on 72km Smart network.

The Southern California Regional Rail Authority (SCRRA) has been awarded $US 25m towards a $US 57m package of capacity improvements on Perris Valley Line of the Metrolink commuter network in Los Angeles. The grant will be matched with $US 32m in federal funds previously secured by the Riverside County Transportation Commission.

The project will ultimately enable services to operate every 30 minutes in both directions, and will include an additional 4.3km of double track and a second platform at Moreno Valley/March Field station. In 2018 and 2020 CalSTA provided funding for a $US 10bn programme to upgrade the Metrolink system in time for Los Angeles hosting the Olympic and Paralympic Games in 2028.

“I congratulate all the TIRCP grant recipients as we work together to rapidly cut pollution from the transportation sector with faster, more frequent, more affordable and more reliable transit service that increases ridership and reduces our dependence on driving,” says CalSTA secretary, Mr Toks Omishakin.