FINNISH national train operator VR Group suffered a 9.9% decline revenues last year as competition from other modes took its toll on earnings, according to the company's 2015 financial results which were published on March 10. 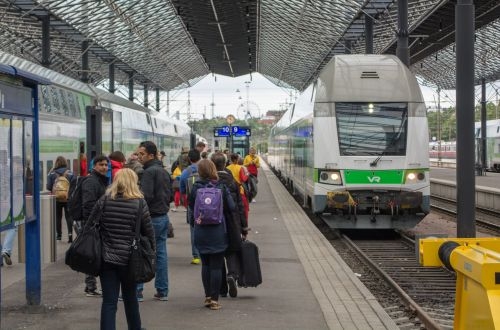 Intensifying competition had a negative effect on VR Group's passenger business, which saw turnover decline by 5.6% to €534.8m. VR Group says successful sales campaigns halted the decline in ridership on domestic long-distance services by the middle of the year, although international trains continued to suffer from the tensions between the Russia and European Union, with a 20% decline in traffic on services to Russia.

VR Group says its strategy to cut prices on long-distance services and increase efficiency to compete with buses was already yielding positive results by the end of the year, although the full impact of this programme will not become clear until 2017.

Logistics subsidiary VR Transpornt suffered a 9.1% drop in freight volumes, which fell to 38.4 million tonnes, although improvements in efficiency helped the unit achieve a slight increase in operating profits, which rose to €27m.

Rail infrastructure maintenance unit VR Track increased operating profits to €18.1m, despite 4.3% decline in turnover, which fell to €300.5m. Declining business in Finland was offset by a sharp increase in track maintenance activity in Sweden.

The VR Group board plans to pay a €100m dividend to the company's sole shareholder, the Finnish government.